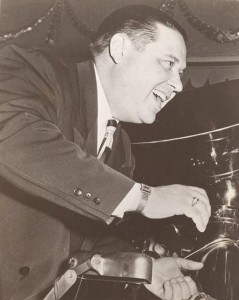 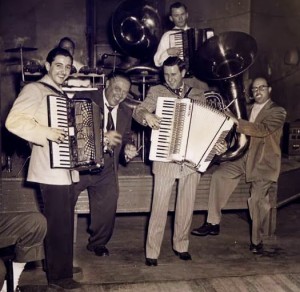 Lawrence Duchow started his musical career in 1932 playing with Hal’s Bluebirds out of Chilton, Wisconsin.  Their first job was for a dance at Kleist’s Hall in Potter, Wisconsin.  Lawrence took over the operation reins in 1933 and called it the Lawrence Duchow and his Red Raven Inn Orchestra as the band was performing at the Red Raven Inn in Hilbert, Wisconsin.  The band grew and began to record for Decca and later for RCA Victor in which they had some of the biggest hits of any band playing polka and waltz music.  The orchestra introduced Windy City Polka, Milwaukee Polka written for the Milwaukee Centennial newspaper, Vagabond Waltz, The Swiss Boy and their theme, Red Raven Polka.  With recording success, came road work, all the way from coast to coast and border to border.  They played weekly at Trianon Ballroom in Chicago and had a weekly coast-to-coast radio broadcast on WGN.  During the war, many servicemen carried Red Raven records with them overseas.

Lawrence Duchow served in the Army until a medical discharge sent him back to the band and his public.  After the dissolution of his orchestra in 1953, the traveling music library was sold to Don Peachy of Burnette, Wisconsin.  Jay Wells of Appleton and Andy Anderson received the rights of the Red Raven Orchestra name and the rest of the library in 1960.

Duchow settled in California, where he developed a store coupon brokerage firm called the Lawrence Duchow Markets.  He also was a booking agent for West Coast orchestras.

His death at the age of 58 in 1972 at Hamlet, California, was the result of a stroke.  He will be remembered for what Franklyn MacCormack of WGN Radio said was “The best damned Old-Tyme band there ever was.”  They recorded some 300 singles.  During the peak of his career, Lawrence Duchow was considered second only to Lawrence Welk in the area of dance music.