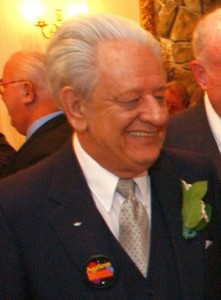 Since his birth November 17, 1933, Larry Chesky has resided in Holyoke, Massachusetts.  Thanks to his parents, Wanda and Joe, Larry was introduced to music at the age of six.  He was given his first accordion.  Whenever you saw Larry, you saw that accordion.  They were inseparable.  With the help of his father, Joe, Larry’s first band, “The Polka Dots,” was formed when he was twelve years old.  After its first regional radio broadcast, the popularity of the group soared.  Larry changed the group’s name to “Larry’s Polka Dots”.

At the age of fifteen, with the help of his mentor and promoter, Joe Tauss of New York, Larry signed with the Musico Record Company.  It as then that Larry achieved his now famous “Big Band Sound.”  A ten-piece orchestra was formed named “Larry Cheska and His Orchestra.”  The group’s first recording was “Our Gang Oberek” which became a hit.

Although a musical success, Larry returned to Massachusetts to graduate from high school, and attend the Hart School of Music.  Back on the road again, Larry Chesky and His Orchestra covered the eastern Polka circuit from New York to Chicago.

Because of the versatility and popularity of the band, it was invited to perform at the Eastern States Exposition and the Cobleskill New York Fair.  This allowed Larry to work with headliners such as Barbara Mandrell, Bobby Vinton, James Darin and many of the Lawrence Welk stars.

During the 50’s, Larry formed the Rex Record Company.  He had a close working relationship with Gene Wisniewski, who formed Dala Records and Al Soyka, who formed Glo Records.  Over many years these three pioneer Polka recording companies worked together for promotion and benefit of the Polka industry.  Larry has just released three new albums which brings his total personal recordings to well over 1000, including 100 albums.

In 1974, Larry formed Modern Mail International.  The company was formed to promote Polish heritage through the distribution of “Proud To Be Polish” products.

Over the years, Larry performed on TV and radio and is currently completing his first video recording.  Although Larry has had a very busy career, he has found time for a very rewarding personal life.  Larry, with his wife, Pat, had four daughters, Laura, Linda, Vickie, and Valerie.  The “Big Band Sound” long thrived in the city of Holyoke, Massachusetts, in the person of Larry Chesky.

Chesky is among the true polka stars who has been inducted into the Polka Hall of Fame. He passed away on January 25, 2011, after suffering a heart attack. He was 77 years old.