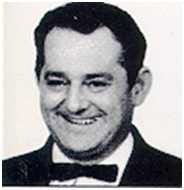 Kenny Bass (Peter Bastasic, Jr.) was considered one of the all time polka greats that made Cleveland the great polka center that it is.  Since 1948 he had hosted radio programs on local area stations including former WSRS, WJMO, WBKC, WELW, WLYT and currently on the Chardon station.

His parents the late Mr. and Mrs. Peter Bastaci raised Kenny, one of seven children (he had six sisters), instilling in him a liking for the Croatian and Slovenian music and culture.

Upon his graduation from Collinwood High, Kenny attended the Boston Technical Institute and majored

in air conditioning with the intention of joining his dad in the tinning and furnace installation business.  From time to time over the years he did help his dad, however, his first love was music – polka music to be exact!

During World War 11, Bass served Uncle Sam in the Navy, winning a Purple Heart and three battle stars.  His job in the service was as radio man in the Pacific Theatre.  Upon his return home, Kenny landed a polka show on one of only eight stations in Cleveland, WSRS.

In 1949 the late Stan Minotas and the then president of the Euclid Vets Club called on Kenny to broadcast live on-location programs direct from their famous festival at the Slovenian Society Home in Euclid.  The event included live performances of the Yankovic, Pecon, Vadnal and Sokach-Habat Orchestra to the delight of the thousands in attendance.

Kenny Bass did regular TV shows of his own in 1954 and 1960, co-emceeing the programs which featured the Kenny Bass Orchestra.  These were in addition to appearances on the Polka Varieties and Old Dutch Tavern TV programs.

The Kenny Bass Orchestra was formed in August of 1950 and within a period of some 20 years would establish itself as one of the greatest recording bands in the polka field.  Some 17 polka albums and 200 singles were produced on the major labels of Coral, Decca, and Roulette Records.  His great ear for music brought together some of the best musicians in the business including the following accordionists: Frank Mauer, Joe Luzar, Lou Luzar, Dick Sodja and Bob Timko.

Appearing extensively in greater Cleveland, their claim to fame as an orchestra was also on the road especially in Western Pennsylvania.  In 1951 the title of “Midwest Polka Champs” was bestowed the Polka Poppers in Michigan.

The Bass Band was the only polka band to appear in a Hollywood produced movie called “One Potato, Two Potato” doing a wedding scene in 1962.

Originally a guitar player, he soon switched to Bass and appeared with the Sokach Habat Tunemixers from 1948 to 1950 recording a big hit, “Blue Skirt Waltz,” which sold nearly one-half million, but it was edged out by the Yankovic version in overall popularity.

Kenny worked in the office of Cuyahoga County Auditor Tim McCormack in downtown Cleveland but lived for quite a while in Richmond Heights with wife Ronnie.  They had five children and three grandchildren.

The Kenny Bass knack for polka promoting was recognized in Youngstown by the Penn-Ohio Polka Pals, a musicians group, which honored him as their Musician of the year.  His presence is certainly missed from the polka scene.