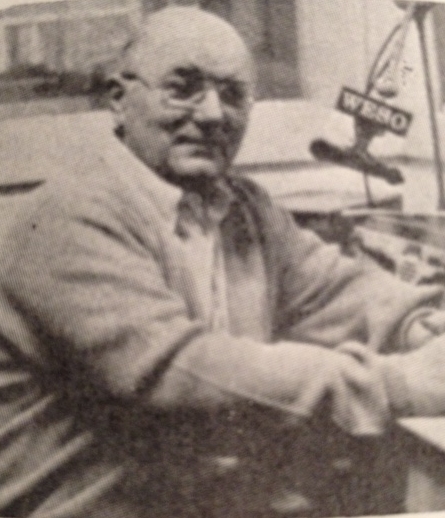 He was born on April 20, 1919, in Southbridge, Massachusetts, where he still lives.  It seems that Polka music has been a part of his life as long as he can remember.  His singing was inherited from his mother, who was a polka contest winner in Southbridge, twice.

In 1943, Johnny joined the U.S. Navy.  After boot training, he was assigned to the Great Lakes Basic Engineering School.  On a weekend pass, he visited his cousin in Chicago, who took him to a dance at Pulaski Ballroom, where he met Steve Adamczyk.  After graduating from Service School, he stayed as an instructor at the same school.  He made his liberties in Chicago regularly, always attending dances where Steve played, and eventually got to sing a few numbers with the orchestra.

After being discharged in April, 1946, he and Stasia Piechota set a wedding date, and were married in November of 1946.  They were blessed with two children, Janice and Jackie.  Janice is married to Ed Bajgier, and they have two daughters, Bethany and Krista.  Father and daughter started dancing lessons teaching the polka, oberek, and figure dances.  Janice was married and left the area, but Johnny continued the classes, teaching two nights a week for 8-week periods, twice a year, and is still doing so.

Polka music rubbed off on son Jackie also, who has been playing with various polka bands for past 12 years, and also co-hosts some of his father’s radio shows.

On March 17, 1955, Radio Station WESO went on the air, and Johnny’s show went on the same day.  He did and still does a bi-lingual show every Sunday.  The popularity of the show prompted the management to give him a Saturday show as well as a summer series of “Sunset Polka Time” shows, from Monday through Friday, from May through September.  On February 1, 1979, the FM call letters were changed to WQVR and so the format changed.  Johnny’s Saturday show was dropped, his Sunday show was switched to FM stereo broadcasting and lengthened by a half hour.  The show was aired from 10:00am until 12:00pm.

In his 27 plus years of broadcasting, he did many remote broadcasts from area picnics and lounges.  Also, for 12 years he conducted a radiothon for the March of Dimes from Pilsudski Hall in cooperation with the Polish American Veterans of Southbridge, raising thousands of dollars.  He also had a polka show on WNEB in Worcester for 13 years.

“Polkatively” was his by-line on a column he wrote for the South County Advertiser and the “Weekend” edition of the Southbridge News.  He also tried his hand at writing songs, many of which have been recorded, including the 1978 best single “Tu i Tak i Tam” oberek.  Other obereks recorded by Eddie Blazonczyk were “Two Pretty Girls”, “Krakow”, and “Chicago”.  “At the Square” and “Kasia: polkas, and “Top of the Hill” waltz.  Heavy Chicago recorded “Best Man” and Moustache” polkas and “Lonely Girl” waltz.  Bay State IV recorded “Let’s Get Together” polka.  He also wrote the Polish lyrics to “Hello Dolly” for Al Soyka and the Polish Lyrics to “Mary Ellen“ for the Sounds.

Radio disc jockey, columnist, vocalist, lyricist, dance instructor, polka promoter, and Polka Music Hall of Fame Trustee since its beginning, are some of the contributions to polka music.  The music he has loved since his early childhood.  His dream—to see polka music grow as big as Country music.  They do have a lot in common.