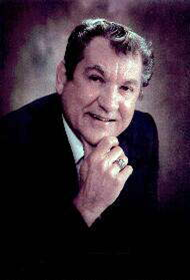 Johnny Krizancic was born March 31, 1929, and at the age of eight years old he started his musical career with the area tamburitzans.

After serving in the Air Force and attending college, he married Martha Dzurinda and performed with many musicians.

In 1960, Johnny and his wife established Marjon Records, which produced over 350 LPs for various music labels.

For over 50 years, he promoted Cleveland style polkas, tamburitza, Polish, German, Czech-Slovak and other styles of ethnic music through his radio programs, recordings and performances. His lifetime achievements as a musician, vocalist, disc jockey, recording engineer and promoter has made him the recipient of numerous awards, such as for his hit song “Long Live Our Brothers and Sisters.”

Johnny Krizancic died at the age of 80 on April 25, 2009. It is proper that he be recognized for his efforts by being posthumously inducted into the Polka Music Hall of Fame.