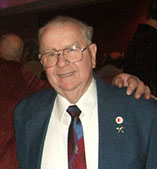 Johnny Hyzny was born in Chicago, Illinois April 25, 1930 to Joe and Ann Hyzny.  They also had another son named Joe, who played the accordion at a very early age.  John’s father figured that if Joe learned to play the accordion, John could learn from him.  But John had always had his eye on the drums.  Finally one Christmas, John received a set of drums.  Years later, John was taught to play the drums by a man named Bustabo.

John’s first professional job ($3.00) was a wedding which he played with his brother Joe.  A few years later, John played with a six-piece groups called The 4 Hamms.  John played drums and Ed Gradowski played the accordion.  They were featured at local clubs like Pep’s Club and the Sabre Room.  During this time, John’s brother was playing at the Casino Lounge with Jack Bustabo (sax.) The band’s drummer passed away.  John replaced him, and played at the Casino Lounge three nights a week.  At that time, John Korosa was doing a radio show from his Club Irene every Sunday.  John, Joe, and Jack finally had the chance to play the Club Irene Polka Time.  They also played there every Tuesday and Wednesday.  Then Eddie Korosa, America’s Prince of Polkas, opened the Baby Doll Polka Club.  Johnny became Eddie Korosa’s drummer for four years, playing every Sunday on radio, appearing on WGN-TV, and all the band’s road trips.

A few years later, Johnny went out on his own with, of course, brother Joe on accordion, Leo Perion (trumpet), Bob Duchek (sax), Jan Kornkowski (sax) and Frank Janis (bass).  The band went under the name of Johnny Hyzny and his Music Makers.  They appeared on Ron Terry’s polka party on WGN-TV and throughout Illinois, Indiana, Michigan, Pennsylvania, and Ohio.  The band recorded on both Jay Jay and Ampol record labels.  Some of their hits were:  “You Are My Honey Polka,” “Money Money Polka,” “Ohio Polka” and “One Has My Heart the Other My Name Waltz.”  Some of the other musicians that played with Johnny were Don Ptak (trumpet), Frank Seliga (bass), Jerry Rajewski (piano), Eddie Benbenek (sax and clarinet), and Tony Paliga (trumpet).

Besides playing, in the early 1960s, Johnny Hyzny and Leon Kozicki along with Marge Vassiv, Lorraine Zawada Benbenek, Marion & Elaine Nowak and Evelyn Golon, published the first Polka Magazine called the Polka Guide.  A few years later, Johnny formed the International Polka Convention.  The Conventions were held in Buffalo, Detroit, and, of course, at Polonia Grove in Chicago.  These were presented under the direction of Johnny and his hard-working committee.  In January of 1968, Johnny Hyzny,  Leon Kozicki, Joe and Jean Salomon, Eddie Blazonczyk and Don Jodlowski met to discuss plans for the next convention.  After a series of meetings, they began preparations for the formation of the International Polka Association.  In October 1968, Johnny resigned as President and named Leon Kozicki to replace him until an election was held.

In 1965, Johnny became the owner and operator of the Personality Lodge banquet facilities.  The name of his business was taken from a title bestowed on him in 1963:  “Mr. Personality.”  This was given to him by polka fans, bandleaders and promoters throughout the United States.

Johnny was an active participant in civic and community affairs for many years.  He was Vice-President for Encephalitis Fund of Chicago and Vice-President of the Chicagoland Polka Disc Jockey Association.  John was a member of numerous organizations including the American Legion, Lions, Greater Midway Economic Development Committee, Bill Bonnett’s Social Athletic Club, Polish American Police Association and many others.  He was the recipient of numerous awards and commendations for his efforts in behalf of charitable and other worthy causes.  Among those were the Des Plaines Valley Man of the Year, the 3rd District V.F.W. Man of the Year, the Lithuanian Alliance of America Man of the Year and the Polish American Police Association Award.

In March, 1984, Johnny celebrated his 30th year on radio, which over the years included remote broadcasts from New York and Michigan plus numerous local festivals, carnivals, etc.

Johnny was the Founder and President of the United Polka Association. He led a successful drive to erect a monument to deceased polka musicians in suburban Chicago, which came to fruition shortly after his decease.

John and his wife, Lorraine, had two daughters, Roseann and Diane, three sons, John Jr., Wayne, and Gary, and a grandson, Matthew.

In the words of John’s late father, “Remember, Life is short. Enjoy yourself.” Happily, he did.