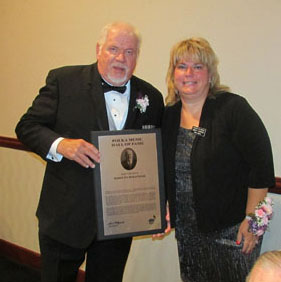 John (Foo) Furmaniak (pictured at right with daughter Christy), was born on August 7, 1948 to Thaddeus (Ted) and LaVerne Furmaniak. He is the oldest of their five children. John became infatuated with the accordion at the young age of 10 when a representative of the Mort Herald Accordion School of Music appeared at his grade school and demonstrated the sound of the accordion. John came home from school that day and asked his dad if he could learn how to play. With a student accordion strapped to his shoulders, John’s journey into music started. John’s grandfather, Paul, loved polka music and he would have John come over to this house on Sunday’s and listen to the polka shows and would say “play the harmonia with the radio”. Harmonia is accordion in Polish. John would listen and start to play the polkas, waltzes and obereks that were on the radio.

At the age of 12, John’s grandfather decided he wanted to buy John a full-sized accordion. John wanted something unique, as he wanted an accordion with the sound of a bass guitar on the left hand. They looked at the Cordovox but John didn’t like that sound. Grandpa Paul said “I know a place that has this Italian guy who makes accordions”. Italo American was the accordion that grandpa ended up buying for John as the sound produced by the left hand sounded very close to a bass guitar.

John’s dad, Ted, knew a guy at his workplace whose son played the drums. His name was Frank Alberts. John hooked up with him and the “Dial-A-Tones” were formed, playing small functions two-piece. The band eventually grew to four pieces and then John enlisted into the Army and served our country from 1968 to 1971. Also during this time, John wed Frank’s sister Cheryl and also had their first child, a girl named Christy.

A few months after being out of the service, John and Cheryl stopped at a bar called “Brothers Two Lounge” on Chicago’s south side. Jerry Zahara was on the bandstand and John told Cheryl “I’m going to get some guys and start the band back up and play on stage again”. The Dial-A-Tones reformed and recorded two albums between 1971 and 1976. John wrote 2 hits “Kiss the Girls and Make Them Cry” and “Let’s All Go Dancing”. He also helped a band member write and arrange “Pots and Pans Polka”. During this time, John and Cheryl also welcomed a second child, a son named John Jr.

The Dial-A-Tones broke up in 1977 and John was asked to join Ted Okrzesik Sr. who was bringing his teenage sons up the ranks as polka musicians. John suggested forming a band and they named it “Windy City Brass”. The band consisted of Ted Okrzesik Sr., his sons Ted Okrzesik Jr and Danny Okrzesik, and John’s friend Stas Bulanda. Ted’s wife Gennie “O” also began to sing with the band as well. John re-corded two albums with the “Windy City Brass” and performed with them from 1977 to 1980. In 1979 to 1980, John also was a radio DJ along with Ted Sr. John and his wife Cheryl also welcomed a third child during this time, another son named Jason.

In 1980, John was asked by Marion Lush to join “The White Eagles”. What an honor! John now had the opportunity to incorporate the electronic bass left-handed with a top-name band. If John was going to play left-hand bass on the big stage, he had to perfect it. He listened to Eddie Blazonczyk records and Marion Lush records and wanted to learn to play all the runs the proper way. While most other bands employed the use of a dedicated bass guitar player, John refined the use of the electronic left-hand on the accordion to the point that it became indistinguishable from an actual bass guitar. He became known as having one of the “best left hands” in the business. John per-formed with Marion Lush from 1980 to 1984 traveling extensively throughout the United States.

In 1986, John’s children were getting older and John wanted to watch and coach them in sports. John began filling in locally with the likes of Li’l Richard, Jimmy Mieszala, Stas Golonka and others. One day John and his good friend, IPA Polka Music Hall of Famer Stas Bulanda decided they wanted to start a band. John said “I have the perfect name”. Let’s call it “Average Polka Band”. From 1986 to 2000 the Aver-age Polka Band recorded thirteen recordings and was nominated for the Grammy’s in 1989. John wrote hit songs for the Average Polka Band such as “APB Opening Theme,” “My Concertina,” “Dance Hall Blues,” “I’m Gonna Love You Forever,” “Happy Birthday Wish,” and after the September 11 tragedy “A Place for Peace.”

In 2000, the Average Polka Band broke up, but after a few months, John and Stas decided to start up another group. John suggested to Stas that he goes back on concertina and the band would play more honky style music. John suggested they name the band “Dyno Chicago”. Stas thought it was a good name so they did it. John self-taught himself the piano and even re-corded piano on a few recordings. Dyno Chicago re-corded two CDs and performed from 2000 to 2003. At that time, John wanted to get away from traveling and decided he would start a band with another buddy, IPA Polka Music Hall of Famer Wally Maduzia. This is when “One More Tyme” was formed. The band re-corded on CD and performed together from 2001 to 2007.

In 2007 John’s longtime friend Stas Bulanda asked John if he would be interested in joining Stas’ band, now named “Old School Review”. John accepted and performed with Stas again on stage from 2008 to 2009.

In 2010 after the passing of his great friend, Stas Bulanda, John was asked by Tony Blazonczyk if he would like to join his band “New Phaze”. John said yes and is currently performing with the band. So far John has recorded two CDs with New Phaze. On the latest CD “For The Love Of The Music” John co-wrote the title song, 2012 IPA Song of the Year, “For The Love Of The Music” and also wrote the hit waltz “Phone in Heaven”..

John has written and co-written over 20 songs over the years. In addition to being a musician, vocalist, music arranger, bandleader, songwriter, DJ and music publisher, John has recorded 23 albums/CDs over 40 years. He was an IPA Director from 1974 to 1978. He has performed on stage with Li’l Wally, Li’l Richard, The Monumentals, Jimmy Mieszala, Stas Golonka, The Music Company, Jerry Zahara, Casey Homel, Jimmy Homel and Richie Gomulka who called John “one of the best side men ever”.

John’s passion for polka music has no boundaries. He enjoys traveling and seeing his many friends throughout the country. John hopes his knowledge and polka music roots can be transferred to the younger polka musicians of today. John has dedicated his life to playing the music he loves. He just celebrated his 40 years of being “on the road again”. John has per-formed at every prestigious festival and event over the years and looks forward to performing for a few more years.