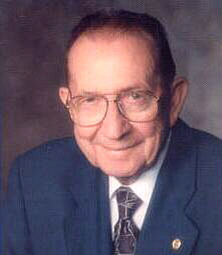 Joe Wojkiewicz was born in Hafa Park, Wisconsin.  By the time he entered school, he was already performing on stage.  As his desire grew to perform, so did his talents.  He became interested in the polka music field as his father had a band.

Joe got started with ballroom promotions, but was interrupted by WWII, while in the Army.  Any time he had a chance, he made a point to visit ballrooms, especially in Australia.  When the war ended, he got right back into promoting polka music.  His first ballroom was the “Wisconsin Roof Ballroom,” in Milwaukee, which had dancing every night except Mondays.  On his night off, Joe would go to different ballrooms in the area, like the Dreamland Ballroom in Milwaukee for ideas and promotion, which is where he met his wife, Beatrice.

Joe and Beatrice moved to Green Bay, Wisconsin, where his love for polka music mushroomed into festivals, concerts, and marathons.  The birth of their son, Joe, Jr., followed shortly.

Joe started performing on stage once again, in a band with his nephew, Dennis Wojkiewicz, who played the concertina with Joe accompanying on the drums, under the name of D.J.’s Polka Band.

Joe’s biggest desire in life was to make a live recording of the Rosary, with all Three Mysteries, and the Way of the Cross, which he successfully did and was placed on the market through several different LP distributors.

His many involvements included the Minnesota-Wisconsin Polka Festival at the Majestic Ballroom in Minnesota, the Seymour Polka Time, Birnamwood Polka Days, Pulaski Polka Fest, and many other polka festivals affiliated with the WOLA, the USPA and the IPA.  Joe’s long hours, dedication and hard work to promote these festivals paid-off through the people’s satisfaction.  This was the biggest reward Joe looked for in promoting polka music.

It’s not so unusual to tune in to a polka radio station or TV show and hear that Joe is once again promoting a polka dance or festival in a nearby or far away city.  Joe has his own radio show on WAUN, Kewaunee, Wisconsin every Thursday night from 7:00 to 8:00 p.m. (92.7 FM).

In his effort to promote Polka music, Joe made many friends, from Mitchell, South Dakota, to Columbus and Omaha, Nebraska to New Ulm, Minnesota, to Chicago and Miami Beach, to New London, Connecticut.