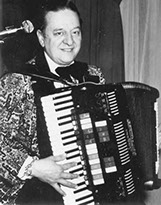 “Joe Pat” Paterek was born in Chicago to Joseph and Mary Paterek on May 21, 1919.  His father was of Slovak ancestry and his mother was of Polish origin.  Joe became interested in music at an early age and began taking music lessons while attending local schools.  After developing a serious pursuit of music, Joe formed his first band in 1932.  For several years he continued to lead his band and on Thanksgiving day of 1942, Joe was married to Irene Desecki.  A few years later they became the parents of Joan Marie.

Three months after marriage, Joe was inducted into the Army Air Corps and was assigned to a unit entertaining the troops at USO shows and other military social functions.  After being discharged from the service in 1946 he enrolled in the Midwestern Conservatory of Music where he later graduated with honors.

In 1946, “Joe Pat” also organized his new ten piece band and played his first return engagement at the popular Pulaski ballroom.  Through the years he developed a vast acumen for music as it related to recordings, orchestrations, radio, television and entertaining live audiences.  Joe was active as a professional musician, bandleader, and entertainer for over 45 years at the time of his induction in 1978.  His versatile band, which exceled in playing various styles of ethnic and polka music performed repeatedly on radio and television; and at the popular dance halls, ballrooms, country clubs, hotels and major social functions throughout the country.  These included providing the musical entertainment for the Chicago Boat Show at the International Amphitheatre, the Auto Show at McCormick Place, the Bobby Vinton Show before 21,000 people at the Chicago Stadium and the countless polka festivals and dances.  In January of 1973, “Joe Pat” Paterek and his band had the honor of having performed at the Presidential Inaugural salute to American Heritage in Washington, D.C.

Joe and his musicians toured seven countries in Europe and performed in Hawaii.  He recorded for the Melodia, Vitatone, Ridgemoor, Polkatunes and Chicago Polka record labels.  He and his band recorded a Polka Mass album of special music, which received considerable national attention and acclaim.

He is now deceased, but fondly remembered by many in the polka field.