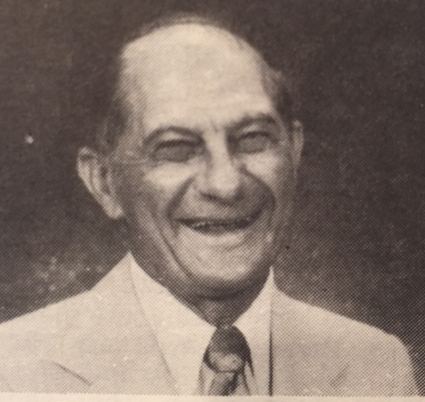 Joe Marcissuk was born in Hamtramck, Michigan. After high school he joined the Armed Forces spending two years in World War II. In 1946 he married Wanda Kawucha and had three children, Patricia, Ronald and Sandra.

In September 1958, he engaged in his first polka promotion. Obtaining sponsorship from the Am Vets, he brought into Detroit Li’l Wally to the Veterans Memorial Ballroom. Because of its tremendous success and the enjoyment which it brought to the many polka fans of Detroit, he began what was later to become his lifetime career in the polka industry.

During the succeeding years, Joe brought into the Detroit area many bands such as Li’l Wally, Marion Lush, Happy Louie, Johnny Hyzny, the Casinos, the C-Notes, the Ampol Aires, the Buffalo Hi-Notes, the Golden Brass and Charlie Tansek.

In 1965 Joe again was not satisfied with just promoting polka music through dance promotions. He was able to gain a one hour polka show on WGPR-FM called the “Polka Express”. Joe then took the name of “Polka Joe” which he carried ever since. After a year on the air Joe added an additional hour.

“Polka Joe” made his first remote broadcast from Bills Bar in Wyandotte, following shortly thereafter from the Senate Café in Hamtramck. All the Polka Express shows were remote broadcasts. Others originated at Fredrick’s Lounge in Wyandotte and the Holy Cross Council K of K in Detroit. In 1966 the Polka Express program made a direct broadcast from Cobo Hall during the International Polka Convention.

Wanda joined him on the Polka Express Show and became known as “Waltzing Wanda”. In 1968, WGPR informed Joe that his polka show no longer fit in with the format of acid rock. The show moved to WBRB for four hours each week. Broadcasts were live remotes on Thursday and Saturday evenings from the Senate Café. After six months, the show gained an additional two hours a week.

In 1964 Joe opened his own record distributorship, known as “Heights Record Distributors”, promoting polka music by selling polka records to various record stores in the Detroit area and also to juke box owners.

Six years prior to their leaving the airwaves Joe and Wanda took up another cause, which became an annual event. This was the Muscular Dystrophy Polkathon, which raised $374,000.00 in 17 years by 1991.

He was active in the International Polka Association for many years, but is now deceased.