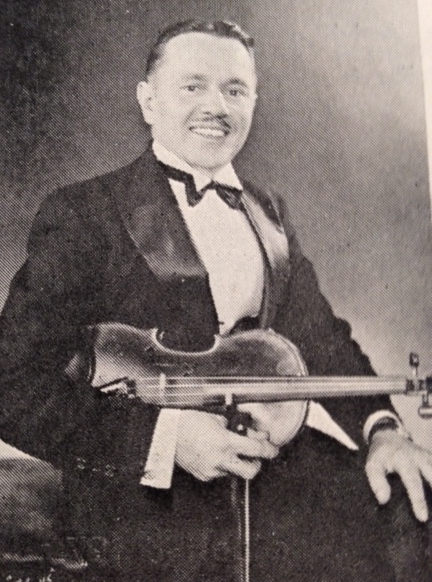 In the early days of polka music, what Alvin Sajewski was to Chicago … Ignacy Podgorski to Philadelphia … Brunon Kryger to Eastern Pennsylvania … Joe Lazarz was to the Northeast.  Born in 1895 in the village of Swiebodzin, Poland, he started music lessons at an early age, as his father and uncles were musicians.  Joe Lazarz came to Indian Orchard, Massachusetts in 1913, and started working at the Indian Motorcycle Company, and playing weekends with small combos.  After twenty-eight years of employment, Joe made the decision to devote all his time and energy to polka music with his already popular “Joe Lazarz Orchestra.”  The orchestra was in existence for forty-one years and traveled almost continuously to Buffalo, to Baltimore, to Youngstown, and all over the East Coast.

The band recorded about eighty 78 rpm records with RCA Victor, until RCA went to all modern music.  Then, about thirty-five records were cut on the Standard phonograph label, until the death of the owner.  The last dozen or so records of the orchestra were produced on the Spiro record label.  The vocals on these recordings were furnished by Henry and Julia Wiegel and then by nieces Clara and Nell Zamachaj.

Among the hundreds of original compositions and arrangements from the pen of Joe Lazarz, are such familiar tunes as; “Wait Til I Tel Mama,” “Rum Cium Cium,” “Ludlow Bridge,” “My Pidgeon,” “High Bounce,” “Girl From Brooklyn,” better known as “Chocolate Soda,” and the most popular and still recorded today “Pizzicato Polka,” better known as “Fiddler’s Polka.”  The last song is fitting as Joe’s instrument is the fiddle.

After forty-one years in the polka field, Joe Lazarz was honored at a testimonial held in March

1973 with deejays, promoters, and polka fans from the entire East Coast.

Joe Lazarz, 82 years of age when inducted, lived in Indian Orchard, Massachusetts near his relatives, friends, and many people who still danced and listened to his many contributions to polka music.  In fact, all polka people will long remember Joe Lazarz for his devotion, writing ability, personality, and love of music. He is now deceased.