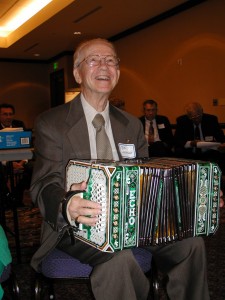 Joseph F. Czerniak of Duluth, Minnesota, was elected to the polka Music Hall of Fame in the Pioneer category.  Joe was inducted along with other inductees, on Saturday, August 5, during the annual International Polka Association Convention and Festival, at the Ramada O’Hare Hotel, in Chicago.

Joe Czerniak has been long acknowledged as a Pioneer in many aspects of the polka industry.  Joe, 65 years young at the time of his induction, was born to Polish immigrant parents in Duluth, and lived his entire life there.  He began professionally at age 14, and formed his own band the Duluth polka Dots in 1939, at age 15.  In addition to concertina, the band used banjo and drums.  They played Polish, Scandinavian, Slovenian, and German styles of old time music.  The band played every weekend until Joe was drafted into the Air Force in 1942.

Of course, Joe took a Concertina into the service with him. When Joe was discharged, he expanded the polka Dots from three piece to four.  Later more members were added.  The polka Dots have been performing for weddings, parties, and polka Festivals ever since – fifty years.  They travel throughout the upper Midwest and have performed in Chicago for the IPA Festival.  A celebration commemorating the 50 year anniversary of Joe Czerniak’s polka Dots for family, friends, former students and band members, took place in Duluth, in July, 1989.

Former polka Dot members include Joe’s sons Bill and Greg.  Bill started taking concertina lessons from Joe at age 6 in 1952.  It wasn’t long before Joe was teaching dozens of other students in his basement studio.  He taught steadily ever since then– for 37 years.  In that time, Joe taught literally hundreds of students, many whom have gone on to gain national notoriety as Concertina players and recording stars.  These include son Bill, and frequent IPA award winner, Renata Romanek.  He inspired numerous local polka groups to start up.  Most recent of these was the Silver Bay Concertina Club.

Many of Joe’s students traveled long distances to take lessons.  This is a tribute to his popularity as a teacher.  He is an excellent instructor, because of his patience and his attention to detail.  Joe emphasized the correct way to play the instrument, utilizing good rhythm, chromatic accuracy, and proper chord application.  Joe’s own arrangements of polka and waltz music for concertina were in high demand, as well as his copyrighted scale and chord transposition chart for concertina.  For many years, Joe sponsored “Concertina Displays,” or concertina get-togethers, not only to promote sales of concertinas, but to provide an audience for aspiring polka musicians.

The Duluth Polka Dots first long play recording was made in 1965, featuring Joe and sons Bill, on concertina, and Greg on drums.  It was called ‘Twin Concertinas.” Joe’s most recent recording was “Concertina Hall of Fame,” recorded to commemorate his induction into the World Concertina Congress Hall of Fame in 1981.  This prestigious event took place in New Ulm, Minnesota, when Joe’s peers in the concertina industry, from throughout the United States, recognized his unique contributions to the popularity and advancement of their favorite instrument.

Joe Czerniak became acknowledged as one of the most knowledgeable and innovative craftsmen, with respect to amplifying and repairing concertinas.  In fact, he was single handedly responsible for the growing acceptance of stereo wiring for concertinas by many nationally prominent concertina players.  Over the years, Joe developed techniques to amplify concertinas, which enable the performer to obtain a “true” concertina sound, despite the amplification.  This is very critical to polka performers.  In addition, Joe is equally adept at tuning and other repair categories.