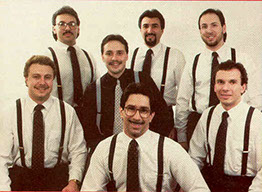 The first time Jimmy went to Fiedor’s Grove to see and hear Eddie Blazonczyk’s Versatones along with Little Ronnie and the Carousels, Jimmy’s interest in polkas began. Starting to play the sax at age twelve, in 1970 at the age of fourteen, he found himself playing polkas with his brother Gary (of Trel-Tones fame) in a local band called the Polka Preps. After six months, the Preps disbanded and Jimmy joined the Trel-Tones. Over the next four years, he played many of the most popular polka spots in the nation and recorded with the Trel-Tones on the Bel-Aire record label.

In 1976, Jim’s experience as a polka-journeyman grew as he broadened his musical experience by playing with Joe Fiedor and the Polish All Stars and the Dynasticks. Jimmy started The Sounds when he returned from Detroit, pulling together talented musicians from several Pennsylvania polka bands. From 1977 through 1981, The Sounds recorded four albums, winning awards from the IPA, USPA and many radio stations for favorite album, song and band. Like all good things, the first round of The Sounds ended in 1981, at which time Jimmy joined the Brass Connection. Jimmy helped write and arrange many of the songs on the Energy album. He played with the Brass Connection until other commitments took him away. Then in 1985, The Sounds once again broke into the polka music scene.

The second generation of The Sounds picked up right where the original band left off. From 1985 through 1990, the band grew in popularity and prowess, recording another four albums racking up additional IPA and USPA awards, as well as two Grammy nominations.

In 1990 Jimmy had to leave The Sounds due to career commitments. From then until 2003, he remained tied to polkas attending danced and festivals and occasionally sitting in with bands such as Polka Family and the Brass Connection.

In 2003, at the request of their many fans, Jimmy reorganized The Sounds and produced The Sounds Alive Again 2003 Reunion Tour. During that year, The Sounds once again demonstrated their polka talents. Despite not having been on the stage for thirteen years, The Sounds proved they can still “rock” with the best of them and recorded their ninth album “Live”. The reunion tour was a huge success.

Jimmy has written dozens of songs and arranged may old standards to have a modern flair. One of his most popular arrangements was the “Up In The Attic” polka medley which paid tribute to bands past and present that impacted polka music. He also served as a studio musician for many polka artists.

Though the saxophone was Jim’s first learned instrument, the forty-eight year old musician went on to master the clarinet, trumpet, bass guitar and concertina. While Weber admits that his favorite instrument to play is the trumpet, he goes on to say that it is a “labor of love” to stay in shape and play it.

Being in a band for as long as Jim has, many great times and memories had to be a part of life. Two Grammy nominations stand out in Jim’s mind since as he puts it “It really lets you know your music is special enough to make a large audience recognize it. Then you know that you are making a difference in your industry.”

When asked what qualities the Sounds possess that gave them so much crowd appeal, Jimmy replied, ‘We had the right blend of musicianship and personality that made the blend attractive to the general audience and musicians as well. Out vocals had a great blend of voices and we worked well together as a team. Everyone knew what they had to do night in and night out.”

Jim has been married to his wife Kim for 14 years and they have four children. They make their home in Hillsborough, New Jersey, where Jimmy is in executive management in a computer consulting firm for the pharmaceutical industry.