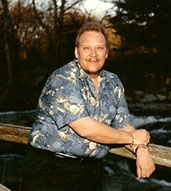 Jackie Libera of Charlton, Massachusetts is a musician, former bandleader, deejay, arranger, vocalist, recorded many albums, and a featured performer with various bands.

To say that John “Jackie” Libera has been involved with polka music virtually all his life is an understatement.

Jackie began his polka music career at age five in 1960 when he joined his father, Polka Hall of Famer Johnny Libera, at the microphone of his dad’s polka radio program.  Soon after, Jackie was given his own show, “Saturday Polka Picnic” which he hosted over WESO in Southbridge, Massachusetts.  The show ran from 5:30-6:30 on Saturday afternoons and lasted two seasons.  Jackie was featured in an article in the March 1961 issue of Radio TV Mirror magazine.  The story, written by Alvhild V. Holmes of Oxford, MA was titled “The World’s Youngest Deejay.”  Jackie also appeared as the youngest polka disc jockey at the International Polka Convention in 1963 in Chicago.

As Jackie grew to a teenager, it quickly became apparent that his genuine love for music was accompanied by a pure and natural talent.  While attending school, he studied clarinet with Mitchel Szydlik and Anthony Zieminski.  He graduated from Southbridge High School in Southbridge, MA in 1973 as a member of the National Honor Society.  He was also a member of the Central District Band as the principle clarinetist from 1971-1973 and the Massachusetts All-State Band in 1973.  Lit was in 1973 that Jackie became a member of his first polka band, the Dick Pillar Orchestra.  He played with Dick’s group until 1977 and recorded two albums on Steljo Records as a member of the group and played on a couple of later recordings done by the Dick Pillar Orchestra.  During the time he was playing with Pillar on the weekends, he was also busy earning his Bachelor of Arts Degree in music from Westfield State College in Westfield, Mass. In 1977.   He was the principle clarinetist in the college’s Wind Symphony for three years. He studied clarinet with Kenneth Legace and Peter Demos.

Later in 1977, Jackie became a member of the popular “Heavy Chicago” band where he stayed until 1982. “Nobody Does It Better” was recorded in 1977 with Heavy Chicago, followed up in 1980 with “Heavy Chicago V”. In 1982, Jackie joined three other local musicians to form the very big sounding “Bay State IV”. Jackie stayed with this crowd pleasing group for nine years and recorded four albums with the group on Polka Train Records.  He had the honor of appearing with the Bay State IV at the 1988 American Folklife Festival sponsored by the Smithsonian Institute held in Washington, D.C.  The Bay State IV was honored to be among the many artisans and musicians representing the state of Massachusetts along with representatives from the former Soviet Union.

It was later in 1991 that Jackie took the stage as the leader of his own band, “Jackie Libera and the Classix”.  Their big, full sound topped with Jackie’s tremendous vocals quickly made them a popular group on the polka circuit.  Their recording “Classiz of ‘93” was recorded in 1993 on Sunshine Records and featured two originals written by Jackie.  It was also in 1993 that Jackie received his Master of Education Degree from Fitchburg State College in Fitchburg, Ma with a concentration in Education Leadership and Administration. The group disbanded in 1994.

In 1995, Jackie joined the Maestro’s Men where he continues to perform today.  With the Maestro’s Men, Jackie is featured on piano and bass and takes the lead vocals. They have made five recording to date with more originals by Jackie included. With every other group he was a part of, Jackie was featured on trumpet, clarinet, saxophone and vocals. Through the years, Jackie has appeared at one time or another with the Polka Family, the New Brass, Eddie Blazonczyk’s Versatones, Jimmy Sturr, Lenny Gomulka and the Chicago Push, Ray Jay and the Carousels, the Dynatones, the Sounds, the Brass Connection, Marion Lush, Ray Henry, Eddie Forman, Freddie K, John Gora & Gorale, Happy Richie, Jersey Polka Richie, Li’l Wally, the Dynassticks, Henny & the Versa J’s and others. Libera was also the musical arranger and orchestra director for the Lenny Gomulka Christmas Shows for five years and a member of the Polish Carolers.

Aside from Jackie’s promotion of Polka music as a performing musician, he has also been heard continually since 1969 over the air waves with his own polka radio show. He has been on the air at WESO and WQVR, with various shows and currently hosts “Polka Spotlite” on WESO 970AM in Southbridge, MA on Sundays from 9-9:30 a.m. He currently co-hosts the “Sunday Polish Show” on the same station on Sundays from 9:30-11 a.m. with his dad, Johnny Libera.

His parents, John and Stasia Libera instilled his love for music and polka music in particular at a very young age and continue to encourage Jackie today along with his wife, Linda.  You can often catch their seven-year-old daughter, Jenna, doing a Polish vocal or two and dancing to her father’s music.  Another generation to be raised with polka music.