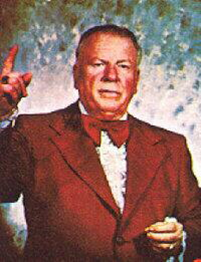 Harold Loeffelmacher was born in 1905 on a farm in Nicollet county near Fort Ridgely of frontier days.  He moved to New Ulm, with his parents, Mr. and Mrs. John Loeffelmacher.  He took his first music lesson on a violin from a Lutheran minister.  He graduated from the violin to wind when he bought a mail order horn and was taught by  A. P. Boock of New Ulm.  He played in the 205th infantry band when Boock was director.

In 1932, he started his own band.  It went under various names, “Continental Band,” “Broadway Band,” until he hit on the name, “Six Fat Dutchmen.”  In those days he had just six men in the band, but the number grew up to a dozen.  Once he had a musician in the band who weighed 314 pounds.  The band appeared often on the John Deere bandstand on KEYC-TV, Mankato.  They were booked to play at the Nebraska State Fair for 26 years straight.  They recorded 800 polkas, waltzes and schottisches on RCA Victor with whom they were for 14 years, and for Dot Records with whom they were for 10 years.

Loeffelmacher had seven buses in his lifetime, which he used to travel 90,000 miles annually from Texas to Canada, and play 335 dates a year.  On winter vacations he played solos on his favorite instrument, the bass horn, with Lawrence Welk, on whose TV show he made 12 appearances.  The Loeffelmacher band played the Aragon and Trianon ballrooms in Chicago, broadcasting live on WGN Radio. The maestro of the Six Fat Dutchmen won the No. 1 polka band award of the National Ballroom operators for seven years in succession.  The poll was conducted by Down Beat magazine.

Harold recalled that when he first started, he was once stranded in Yankton, South Dakota, and had to wire home to his brother for $10 to get back to New Ulm.  Another time, he borrowed $10 from a banker and had a tough time getting it repaid a dollar at a time.

Harold Loeffelmacher and his wife, Clara Ahrndt of Benson, Minnesota, had a son and two grandchildren. His second wife, Geneva, was very helpful in the business. At 70, when inducted, he raised fruit in New Ulm.  He liked to travel and visited 35 countries in Australia, Europe, South America and Africa.

He is now deceased and greatly missed in the polka field.