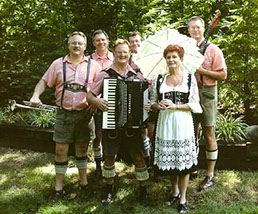 Hank Haller of Westlake, Ohio, is a musician, vocalist, bandleader, deejay, has made numerous recordings and leads a traveling band.

Mention Hank Haller and visions of oompah music and “lederhosen” [short leather pants], come to mind.  But Haller is more.  He is a very prolific recording artist in the polka field with seventy albums and three videos to his credit, with over one quarter of a mullion albums sold.

While he is a leading proponent of German style polkas, Haller is a big fan of the Oberkrainer music of Slavko and Vilko Avsenik of Slovenia and Cleveland style polkas. He has recorded many albums which feature Slovenian and English lyrics sung to these polkas and waltzes.

His parents, Henry and Katherine, emigrated to Cleveland from a German settlement in the former Yugoslavia, seven decades ago. Haller started playing the piano accordion at age eight, but his teacher doubted his talent, so he switched to clarinet. He picked up the accordion again at age 16 and joined his uncle Jake Haller’s band in 1952. Within five years, Hank became the leader and the Hank Haller Band has had a non stop run for fifty years.

Haller started playing on a regular basis for his friend Steve Bencic at the Sachsenheim Club in 1958. A few years later at the opening of Bencic’s “Hofbrau Haus” Restaurant in Cleveland, he was the house band. The Hank Haller Band was in on the ground of the Berman beer festival

“Oktoberfest”.  Haller numbers among his musical career highlights his annual performances for 15 years at the Bavarian Festival in Barnesville, Pennsylvania (near Allentown). He said the first time he saw the festival, it was the biggest festival he had ever seen. He quickly became accustomed to playing for the 110,000 people in attendance.

Another highlight for Haller was the nomination of this album “Thank You Dear and Give Her Roses”, for a Grammy award in the polka category in 1987.

For thirty years he was joined on stage by his wife Maryanne, who sang with the Haller Ensemble. Haller sings on many of his recordings as well as featured vocalists Jerry Krocek and Ken Umeck.

As an indefatigable polka promoter, Haller is a travel tour leader too, inviting fans and friends who, to date, have joined him on thirty four cruises and trips to Europe and Hawaii.

Another facet of Haller’s energy and popularity was exhibited by the 200 appearances the Haller Band made on the weekly “Polka Varieties” television program, during its 27 years on the air in Cleveland. He also found time to host a German radio show in recent years.

Like many musicians, Haller had a day job. He earned a master’s degree in aerospace engineering from Case Western Reserve University. He worked at NASA for twenty years and fifteen years for the US Department of Defense.

Haller also has branched out into the polka music of other nationalities, including Bohemian, Slovak and Austrian. One thread is a constant factor in his recordings. Haller plays it authentically or as he says “authenticity is paramount.”

He and Maryanne reside in Westlake, Ohio. The couple has four children, daughter Hillary and sons Henry Jr., Peter and Conrad.