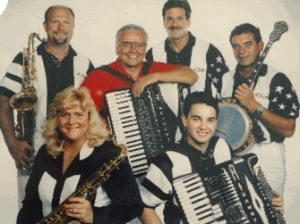 Gary Seibert, originally from Cleveland, Ohio, started playing the accordion at the age of 8. By the age of 12 he started his own two-piece band, resulting in over 60 years of musicianship.

Throughout his school, Gary would play at the local canteen, parties, and of course, local Friday fish fries. Shortly after high school, Gary enlisted in the Navy where he used his musical talent to entertain the troops whenever the opportunity arose.

On August 17, 1957, Gary married his childhood sweetheart Phyllis. While Gary was known as the catalyst and enabler for many people, his devoted wife was the mainstay and backbone of the family.

In 1961 the Air Force brought Gary out to California. After an additional four years with the Air Force, Gary left the military to become a firefighter with the Carmichael Fire Department, where he was the Engineer for over 26 years.

Even though musicians were hard to come by in Sacramento, his dream to continue playing Slovenian style music did not waiver. He started teaching his own children to play. Son Mark played the drums and daughter Donna played the sax, buttonbox and bass. Gary’s Polka Power Band continues to perform under the guidance of his children.

Gary also had the talent to teach music, which included the teaching and writing of Cleveland style polkas and waltzes. He wrote numerous songs, many of which have been recorded by other bands. Gary not only taught the technical end of the music, but he also instilled in each student the importance of playing from the heart. He especially had a significant influence over the younger generation. With his guidance, some have even gone on to record and entertain themselves.

Gary had taken his music to the mountaintops of Slovenia, on worldwide polka cruises and various U.S. tours. He and his band played at numerous polka festivals across the country, sometimes sharing the stage with many polka greats and Grammy nominees and winners.