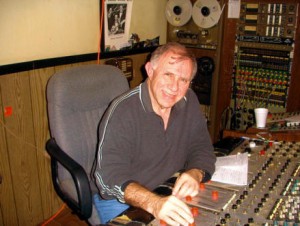 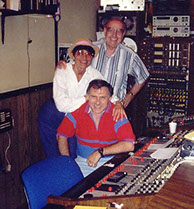 While at Ohio University where Gary (seated at right) received his Bachelor of Fine Arts degree in broadcasting he produced a live jazz program called “Campus Jazz” which aired weekly on WLW Radio in Cincinnati. After college, Gary went to Youngstown in 1967 to work for WBBW Radio as well as for United Auto Recording as an engineer. Following two years as a producer-director for the US Army’s Television Division at Fort Knox, Kentucky, he received the distinctive “Hell on Reels” award for outstanding service and returned to Youngstown in 1970 to form Peppermint Recording Studios.

The popularity of early recordings by Joe Fedorchak, Joey Miskulin, Bob Turcola, The Dynatones and the New Brass promoted Gary’s reputation in the polka field.

In 1986, “70 Years of Polka Hits,” which Gary recorded with America’s Polka King Frank Yankovic, was awarded the first ever Grammy in the newly established “Best Polka Recording” category. Again, in 1992 the album, “35th Anniversary” by Canada’s Walter Ostanek, which Gary recorded and mixed, received that year’s Grammy award.

Most recently, the team of Rhamy and Ostanek brought home the 1993 Grammy with the album, “Accordionally Yours” and again was successful in winning the 1994 Grammy with “Music and Friends.” Significant also is that each year during the eighteen years in which polkas have been eligible, as many as four of the final five Grammy nominations for this category have been engineered and mixed by Gary. His recordings for Yankovic, Ostanek and other artists have received numerous awards from national organizations. In addition, the Penn-Ohio Polka Pals, a Grammy nominated group of sixty musicians, selected Gary as their “Man of the Year” in 1994.

Gary’s talents shine not only behind the control board, but also in front of the microphone. His broadcast background and announcing skills have been the basis for his producing award winning commercials and jingles as well as being the voice for area advertisers and national firms. Gary announced and engineered the pilot demo for the popular television show “American Gladiators.”

Even with his busy schedule, Gary still has time to be a radio host on top-rated radio station WSOM, Salem, Ohio.