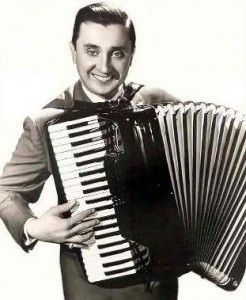 Both Andy Yankovic and Rose Mele came to America in 1903 from the Republic of Slovenia. However, neither knew the other in the old country. They first met in a lumber camp in Davis, West Virginia, where many Slovenes worked. Married in 1910, they had three daughters: Josephine, Rose and Mary. In 1915, Frankie, their only son was born. Eventually, Yankovic moved to Cleveland, Ohio.

Andy Yankovic worked as a crane operator before investing in a hardware business. In addition, he always had about seven or eight Slovene bachelors living in the house as boarders. Young and spirited, they were full of vitality and charisma. One of them, Max Zelodec owned a button box. After supper, Max would invariably pick up the button box and the boarders would start singing those good old Slovenian songs. Frankie’s father would join in as well as any others who stopped by. While they sang, Frankie’s mother would sell them wine. The more the drank, the better they seemed to sing.

Frankie noticed how Zelodec was the center of attention and recipient of compliments and drinks. That’s when he decided he wanted to be like Max and asked him to give him a few lessons. Frankie learned very quickly and at the age of 9 began to play for the boarders and neighbors. His father was very proud of how well he could play. One day Frankie’s mother came home with a button box of his very own, and his playing really started to develop. He carried it everywhere he went. By 15 he had mastered the button box and developed a reputation for playing at various lodges.

Much to his father’s dismay, Frankie’s interest turned to the piano accordion. His father felt the accordion would never provide a living. But, Making a living at music was something Frankie never even dreamt of. Sixteen-year-old Frankie turned to his mother and after some begging, she bought him his first piano accordion for $500. Because Frankie’s mother was afraid of what his dad might say, Frankie had to practice and keep the accordion at sister Mary’s house. She also warned him to learn to play well because she was sticking her neck out.

Frankie only had a few lessons in his life, the first from Joe Notari and others from Joe Trolli. Finally the time came when he had enough confidence to face his father. On Christmas Eve, Frankie walked in playing one of dad’s favorite Slovene waltzes. His father listened, smiled and put his arms around Frankie and said, “If you’re going to play it, play it well.”

Frankie’s first band built their reputation gradually, soon becoming one of the most popular bands in town. According to Frankie, “We had more personality.” He got the idea from Jackie Zorc, one of the old cheese box masters, who always smiled when he played. “I thought Zorc was most fun, so I imitated him, smiling widely. Then I added another touch and stood up and bounced around the stage. I’d always tell the guys, come on, let’s act alive, like we’re having a good time and it made a big difference.”

In 1932, things really started to happen. Doctor James Malle invited Frankie to play on his Sunday Slovenian radio program. Later, Martin Antoncic (Heinie Martin) took it over. Radio gave Frankie great exposure because everyone was listening to it at that time. Soon people began asking Frankie to make a record which Heinie thought it would be a good idea.

In 1938, Frankie went to Columbia and RCA Records, asking to record for them. When both companies refused, he decided to cut two records on his own. However, he wasn’t a member of the Musician’s Union yet. He still wasn’t thinking of music as a career. So to avoid trouble he left his name off the records and recorded under the name of “The Slovene Folk Orchestra.” They took the record to Mervar’s Record store and it became an instant hit. The records sold as quickly as Mervar received them. The next year, Frankie recorded two more 78 rpm records, once again paying all his own expenses. Again, they sold out as quickly as they were available.

The demand for Frankie and the boys was increasing. They played for the dances, weddings and night clubs through Ohio, Michigan and Pennsylvania, while Frankie also worked as a pattern maker and accordion teacher.

In 1940, Frankie married his first wife, June, and almost immediately began raising a family. He continued to draw record crowds everywhere he played. He’d play for $5 and would spend $10. Who’s doing the work, and who’s making all the money? So in 1941, Frankie decided to go into the tavern business. After all, it took money to raise children. Everybody thought he was crazy. They couldn’t understand why he wanted to get involved in the bar business and jeopardize his music. For that reason two members actually quit the band. In about a month, the Yankovic Bar was really jumping, becoming a hangout for musicians like Pecon, Habat, Vadnal, Hokavar, Bass and others.

Frankie continued playing at his own bar, as well as others. The club’s grand opening was December 6, 1941, the day before the Japanese bombed Pearl Harbor. On March 17, 1943, Frankie went into the army and of course took his accordion. He entertained the men in the barracks and was asked to play in the Officer’s Club.

Home for a two-week furlough before going overseas, he couldn’t believe how busy the Yankovic Bar was each and every night. He was thinking about making some more records while he had a chance. One afternoon, he got the boys together and cut 32 songs on 16 records. There was no rehearsal or time to fool around, and if they hit a wrong key they kept going. The records were instant hits.

On December 6, 1945, Frankie came home from the army to one of the biggest boomtimes ever. With the war over everybody was starving for some fun. The Yankovic Bar was jumping every night of the week. Frankie started his four piece band again. He was busy running the bar and at the same time getting more and more requests to play but he still never considered music as a career.

He liked the sound of the Solovox (electric organ) and started using it on jobs. But the sound wasn’t full enough. After the war, Frankie and Johnny Pecon (a fine chromatic accordion player) became best of friends. In 1946, Pecon joined the band, which produced the fullness and sound for which Frankie was looking. Pecon would play harmony while Frankie would play melody. This was a “first” for two accordions to be in the same band. Later that same year Columbia offered Frankie a recording contract with a two-year option that lasted for 26 years.

When Johnny came out of the Seabees, he brought with him a tune the Sheldon brothers had written entitled “Just Because.” Frankie really liked it and felt it had a lot of potential, but it needed a second part. So Frankie called in Pecon and Trolli and together created the second part.

On December 31, 1947, Frankie and the boys had a recording session with Columbia. Frankie suggested “Just Because,” but Columbia didn’t want anything to do with it because the Sheldon brothers recorded it years before without success. Frankie argued with them, kicking chairs, and throwing sheet music around the room, but Columbia would not budge. Finally Frankie said, “Okay, I’ll make you a deal, I’ll buy the first 10,000 records myself. I know I can sell them.” So, Frankie and his Yanks recorded “Just Because” without a rehearsal featuring Pecon and Frank harmonizing on the vocals. Undoubtedly, that was the beginning of a craze we know of today that has benefited generations of audiences and musicians alike.

In 1948, Columbia released “Just Because” and the song broke the barrier between polka music and popular music, skyrocketing Yankovic to national fame. It wasn’t long before “Just Because” sold a million copies. Also, in 1948 Frankie became America’s Polka King. The major record companies promoted a polka contest in Milwaukee, Wisconsin, to determine the best band. With each company represented, 8,000 spectators voted. When the votes were counted, Frank and the boys won by an 8 to 1 margin. They also won the next two years, after which the competition ended. Having realized that music would be his lifelong career, Frankie sold the bar business. He put his heart and soul into it with a commitment to go all the way.

In 1949, lightning struck again with the recording of “Blue Skirt Waltz,” skyrocketing even faster than “Just Because” and became the Polka King’s second biggest seller.

As the years rolled by, Frankie’s band kept changing. The boys would spend a few years on the road then decided to pack it in. They were playing as many as 300 one-nighters a year, traveling about 100,000 miles by car and getting home for maybe 25 days out of that whole time. Sometimes, Frankie would hear rumors when his band members would leave (especially his accordion players) that he was through, finished, usually coming from jealous musicians and critics. Each time, Frankie would prove them wrong. He’ll admit he’s not a real virtuoso, like Myron Floren or Joey Miskulin. But, then, no one can truly imitate his unique style of playing or that certain on stage personality that can only come from the heart.

No matter what, Frankie was always fortunate, finding outstanding musicians and always gave them credit. Then in the early 60’s while playing in Chicago, he noticed a young 13-year-old boy sitting by the bandstand staring at him. The boy asked Frankie if he could play along. Frankie always encouraged young talent and brought him up. After listening a while, Frankie knew he was one in a million. His name was Joey Miskulin, and his first job was in 1962, while Joey was still 13. This was the start of a relationship that has lasted for the past 35 years. Joey continued his studies of the accordion and music while riding in the back of the bus from job to job. He had a good sense of how Yankovic wanted to be heard and began writing and arranging songs. Later Joey started arranging and producing Frankie’s albums which included the Grammy Award Winning album “70 Years of Hits.”

Columbia continued to release those great Yankovic tunes going from 78 rpm to 45s to 12″ LPs. Frankie had his own television show, “The Yankovic Hour” in Cleveland, but because his travels prevented him from being there every week, the show was changed to “Polka Varieties.” Frankie also had his own television show in Chicago and Buffalo. Both shows were called, “The Frankie Yankovic Show: America’s Polka King.”

Over the years, Frank appeared on many other TV programs such as Johnny Carson, Phil Donahue, Arthur Godfrey, Pattie Page, Jackie Gleason, Kate Smith, David Frost and, of course, Lawrence Welk. He has played all the major ballrooms across the country. Breaking attendance records wherever he went. He has also been to other countries, including Canada, Germany, Spain and Yugoslavia, playing to standing room only audiences.

In 1977, Frankie had his autobiography written, “The Polka King: The Life Of Frankie Yankovic,” as told by Robert Dolgan, now out of print, but available in libraries.

Through the years, Frankie received numerous awards recognizing him for his many achievements. One of his many thrills came in 1969, when the Federation of Slovenian Homes in Cleveland honored him as “Man of the Year.”. He was one of the first two men inducted into the “International Polka Association Polka Hall Of Fame” in Chicago.

He has passed on, but is remembered by his many fans.