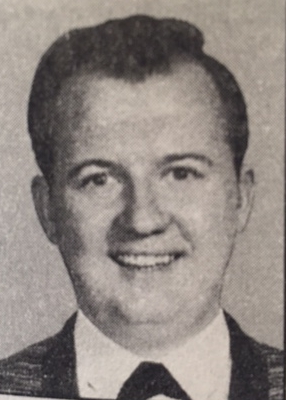 Frank Grybosh had been a polka musician for 18 years and led a 6-piece orchestra under the name of “Frankie Gee” before he was tragically killed on January 1, 1970.

Frank Grybosh was born in Ludlow, Massachusetts on October 9, 1936, and was the only child of Wanda (Topor) and Frank C. Grybosh.  At a young age, he started playing the accordion and had an avid interest in polka music.  He started his first band, The Rhythm Knights, at the age of 18.  The members of this band were:  Frank Grybosh, Bob Nowak, Stan Warzecha, Richard Snieczyk and Sonny Dvorchak. This group of young men primarily played for weddings, showers, and other local engagements.

In 1956, the band developed into Frankie Gee Orchestra and traveled throughout New England playing polka music.  The Frankie Gee Orchestra consisted of Frank on the accordion, John Maziarz on the clarinet and saxophone, Al “Buzzy” Lanier on the trumpet, Eddie Gryb on bass, Paul Kszaz on drums, and Lymon Lombard and Walt Kiesiek on piano.  A significant inspiration for his music was his wife, the late Pearl (Gwozdz) Grybosh.  She was fluent in the Polish language as well as a pianist, and would assist Frankie in writing his music.  Frank and Pearl had four children:  Teresa, Joanne, David, and Edward.

Frankie was a congenial man, mannered and always willing to promote polka music.  He was a dedicated, hard-working polka artist who attempted to keep alive the music he so loved.  He continually sought methods of improving his performance.  He was always delighted to please those whom he played for and above all respected the polka public that came to see him perform.

On January 1, 1970 an unbelievable tragedy occurred at 2:15am in the town of Revere, MA.  After playing as the star musical attraction at the annual New Year’s Eve Party sponsored by the Polish National Lodge 630 at St. Michael’s Hall in Lynn, MA, Frankie Gee, popular bandleader, vocalist, accordionist, and Rex accordion artist, was struck and killed by a car traveling at a high rate of speed.  This all happened while exchanging New Year’s Eve greetings with fellow polka bandleader Wesoly Bolek (Bill Bolek), in between their vehicles, which were parked in the breakdown lane.  Suddenly from out of the darkness, a speeding vehicle smashed into Bill Bolek’s van then swerved and hit Frankie Gee.  The vehicle responsible for the death of Frankie Gee never stopped.  The incident happened so quickly that the car could not be readily identified.

He recorded two top-selling LPs in the polka field on the REX label, including “Polish Melodies” and “Polka Whoopie”.  A third recording was in the process of being made at the time of his unfortunate passing.  He was a member of Local 171 of the Musicians Union in Springfield, a charter member of the U. A. Polka Association, and was an active member in the Polish American Citizens Club of Ludlow, MA.  For the year 1970, he had playing engagements booked throughout New England; however, at the request of his wife, the orchestra disbanded.  May he rest in peace.