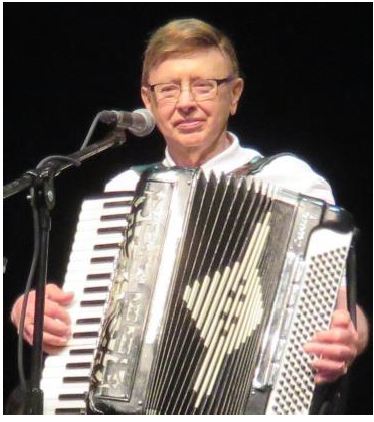 Florian Chmielewski is the product of a family that has been synonymous with polka music for six generations. One of 15 children, he was born in Sturgeon Lake, MN on February 10, 1927. As he progressed from a dairy farmer, to County Commissioner, to Minnesota State Senator, Flo-rian always maintained his love for the accordi-on. At age 18, he received his first accordion in 1945 and began to lead a band. Florian’s children later joined the band that went on to produce 40 albums. After performing with his brothers on his weekly radio shows, Florian also broadcasted the Chmielewski Funtime TV show for the next 35 years, seen nationwide.

Now in its 38th year, Florian started the Chmielewski International Polkafest, and established Funtime Tours. After receiving nine Minnie Grammies from the Minnesota Music Academy, he was inducted in the MN Music Hall of Fame and the Ironworld USA Hall of Fame, along with his daughter Patty. Most recently, Florian received an Honorary Doctorate of Law and Music Degree for his 26 years in the MN State Senate and his dedication to polka music.

In recognition of these and other achievements, the Electorate has determined Florian Chmielewski to be inducted into the Pioneer Category of the Polka Music Hall of Fame®.