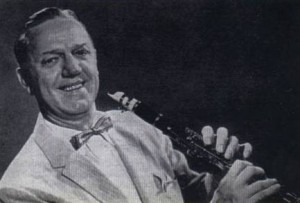 Born in 1908, Victor “Fezz” Fritsche started his own band in 1940.  He used seven men mostly, sometimes three or four.  In the early 50’s, he had the “Fezz Fritsche Show” on KNUJ radio in New Ulm, Minnesota.  He called his orchestra the “Goosetown Band”.  Fezz sprung out of Goosetown, the area that New Ulm sonamed because geese roamed free on the streets and yards in pioneer days.  He profited from his band and those long, sleepy rides through the night, home from dance halls in Wisconsin, Iowa, South Dakota, as well as Minnesota.  He was one of the best old-time band leaders in New Ulm, ranking with Harold Loeffelmacher, Babe Wagner and Whoopee John Wilfahrt.  Fezz Fritsche and the Goosetown Band made many radio appearances, locally, in Minnesota, and other states.  They were featured many times on KEYC-TV in Mankato, Minnesota.  They were always hired for the Polka Day Show which advertised Polka Day in New Ulm.  He was a great showman and always had lots of jokes and stories to tell, for which he would change words and names to fit the occasion.

His first cancer operation took place in 1965 and he wasn’t expected to live.  After recuperating he was in good health until 1977 when he contracted cancer of the colon.  In 1979 he was hospitalized again and then ran into trouble with lung cancer.  His death came in 1980, long after the first time Fezz “died” of cancer.

Fezz Fritsche’s baton was his clarinet. “Tanta Anna” was his theme, and his big nose his trademark.

One evening during Polka Days in New Ulm in the ’50s, nine bands paraded at 8:00 p.m. and took their places on big flatbed trailers.  They played polkas, schottisches and waltzes until midnight, then dispersed after a few encores.  The crowd numbered about 25,000.  But the music of the Goosetown band lingered on.  Taverns closed, but the celebrants wouldn’t give up.  The music of Fezz kept them at his feet a swaying mass shoulder to shoulder.  It wasn’t until 1:30 a.m. that the great showman promised he would sing “Tanta Anna” one more time if they would let him stop and go home.