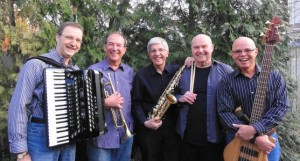 Ed Guca was born on August 7, 1944 to a very musical Polish family in Toronto, Ontario, Canada. His uncle played clarinet in a popular wedding band and was of particular influence in Ed’s love for Polka music. It was in his youth that Ed learned how to play the accordion from a teacher who showed him how to play from the heart.

Ed formed his first band, The Polka Aces, in high school. He also took up clarinet and sax, which he mastered as his favorite instruments. After university, Ed, along with fellow musicians Joe Banel and Ed Grzesik, traveled to Chicago where they became acquainted with Li’l Wally. Wally was a great inspiration for Ed and suggested a new name for the band, The Polish Canadians. Ed Guca & the Polish Canadians soon became one of the most celebrated Polka bands of the 1970s and 1980s, performing at all the leading Polka festivals of the time.

During his heyday, Ed also engaged in a number of other exciting ventures. He hosted a show called “The All Night Friday Night Polka Party” as a DJ on CHIN-FM radio. He established RAM Records to record Canadian Polka talent. He ran the Canadian Polka Carnival on the first Friday after every Easter for 25 years, and promoted various other Polka dances, bringing top Polka bands from the USA to Canada. One of the greatest highlights of Ed’s career was to perform at the 1977 World Polka Festival in Poland.

In the early 1980s, Ed stepped away from the stage to raise two beautiful daughters, Weslie and Karen, with his wife Wanda. However, it was not long before he was recruited back onto the Polka scene by the Canadian Fiddlestix, touring with them until the group disbanded.

Come the 1990s, Ed formed a Polish pop band called Major Music, but soon reunited The Polish Canadians by popular demand from his Polka fans. With a desire to record his music once again, he constructed a modern digital studio and started POLANCA Records.

Ed has recorded eleven LPs on the RAM, Jay Jay, PolkaTone and Bel-Aire labels and three CDs on the POLANCA label. Ed’s biggest hit was “Ej Mamusiu Moja,” which has been recorded by several other Polka bands.

At 65, Ed Guca is still performing, recording, and is currently in charge of the entertainment committee for the Roncesvalles Village Polish Festival in Toronto, promoting polka music to over 100,000 people each year.