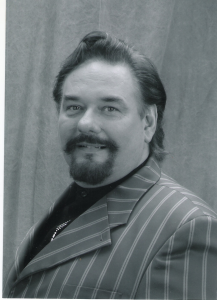 Eddie was born in Toledo, Ohio to a musical family.  Mother Gina is a trained clarinetist and vocalist while father, Dionysius “Danny” Biegaj played trumpet and sang.  With the help of “Busia” Helen (his maternal grandmother) at a young age Eddie started his love for polka and Polish culture and heritage by singing along to the 78 RPMs and 45’s of such greats as Frank Wojnarowski, the “Connecticut Twins” and “The Naturals”.  He started formal training on drums in 2nd grade.

Eddie started performing professionally in fifth grade, both singing and drumming with a trio.  By eighth grade, he passed auditions to join other bands and began performing with adult musicians.  His father bought him a used Giulietti accordion for Christmas – the very same accordion he has played his entire career.

High school was a great time for musical and physical growth.  Eddie borrowed $400 from his “Dziadzia” to buy his first concertina; he started his own band; played soccer; ran cross-country; coached basketball and soccer; had starring roles in the musicals “Funny Girl” and “Anything Goes”; recorded his first album with “The Troubadors” and met his life long colleague in music—Randy Krajewski.  Their friendship would grow and the two would challenge each other’s musical talent to reach new heights and direction.  Eddie was invited by Randy to join Barb Zielinski’s “The Holy Toledo Polka Stars” band.  This short musical exploration set the ground work for the innovative and unique creations that would emerge over a decade later.

Eddie began voice training in college under the tutelage of the late Professor Tom East who propelled Eddie’s voice to venture in a new direction – the world of opera.  Eddie was only able to take on a few select roles in opera productions, but his love of the genre was already well-rooted and continues to this day!

Eddie was instrumental in forming the band known as “Toledo Polkamotion” which afforded Eddie the forum to aptly display his extraordinary vocal ability (He is one of only two recorded vocalists – he and Stas Jaworski – who can hit “high-C” full voice) but to write original material and to arrange music – in addition to playing concertina, accordion, drums and piano.  The polka legend, Joe Oberaitis, has deemed Eddie “The Polish Caruso”.  His charm, good looks and vibrant mid-west personality quickly intensified the popularity of the band.

The recipient of numerous awards, including the coveted USPA’s “Male Vocalist of the Year”; IPA’s “Male Vocalist of the Year” – as well as receiving a Grammy nomination in 1990 for TPM’s “Grand Illusion” album—featuring Eddie’s own arrangement and his memorable and resounding delivery of “Red Berries”, Eddie is noted for his unique style of playing not only the popular “Chicago Push” and “Honky” style polka, but remaining ever-cognizant of his roots, playing “Eastern” style as well.  It was  his courageous exploration of polka in new as well as time honored tradition that earned Eddie the title – “Polka Bad Boy”.

Utilizing the best of each polka style, Eddie formed  his own band “Crusade” which quickly achieved notoriety as the leading group to explore new frontier in polka while resurrecting some of the greatest traditional polkas.  One of his most notable recordings, the album “In Response to Exile” by “Crusade” pushed not only the boundaries of polka music with the intent of interesting polka to a new and sometimes younger audience, but inspired the talented musicians who performed this work to seek and achieve totally new levels of concept, creativity and performance.

In 2006 Eddie moved to New Jersey.  After a brief hiatus, his versatile voice returned to not only cantor in church, but also to perform and record with several East Coast bands and choirs as well as to do solo appearances.

Eddie can be heard on recent albums by such notables as “Bud Hudenski & the Corsairs”, “RBO”, “John Stevens Doubleshot”, and the legendary “Joe Oberaitis” – to name a few.

Ever-dedicated to preserving and promoting polish culture, heritage and polka music, he also is heard weekly performing as the popular IJ (Internet Jockey) known as “The Bad Boy” on internet radio “Polka Jammer Network” as well as on AM-station WWCB and FM station WERG.  His shows highlight both the new recordings of today’s  artists as well as featuring “the Greats” from the past.  Additionally, Eddie’s unsurpassed knowledge of polka “trivia” and nostalgia is readily shared in lively interviews with polish celebrities and in the “Jammer’s” chat room.

Most recently Eddie has joined a German-inspired band known as “Bavarski” which performs Polish, German, Slovene, Czech, Rock-n-Roll, Pop and Classical music – again in a traditional venue – with a twist of creativity and, in the inimitable “Bad Boy” style of pushing the boundaries of creativity and design.