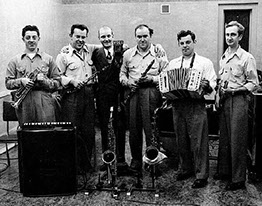 Eddie Zima was born in 1923 in Chicago and began playing the concertina when he was 6 years old.  His mother, Eleanor, upon noticing his eagerness and ability to play, signed him up for lessons.  The concertina was too big for the boy to carry, so he hauled it to lessons in his little red wagon.  He attended St. Helen’s grammar school in Chicago’s north side from which many polka musicians graduated.  He then went to Crane Hgh School.  His first jobs as a musician were among people in his neighborhood where he was called on to play at dances, picnics and weddings.

His band was among the first Chicago polka bands to make records and his early recordings familiarized people with Chicago’s style of polka music.  His Capitol recordings made a hit in Texas.  He was signed by Dana records and made seven albums for them.  His biggest Dana hit was “Circus Polka.”  He also recorded on the RCA, Chicago and Jay Jay labels.

Eddie Zima composed many tunes.  He had a great ear for music.  Polka dancers loved his tempo and he was a good dancer himself.  Crowds followed him to picnics and dances.  He played in Wisconsin, Ohio and Michigan as well as in the Illinois area.

Eddie Zima passed on April 28, 1966.  He is survived by a widow and three daughters, Pat, Joan and Maxine.  He left behind a Chicago Honky style of polka music picked up by many bands.