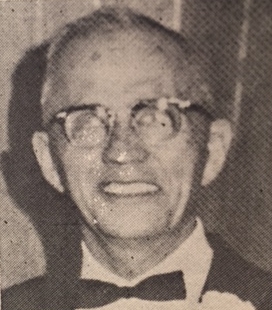 There can be little doubt about Eddie Oskierko being a pioneer in radio and in the early formative years of polka music.  The history of his career can be summarized in one word:  “determination.”  When Ed started his radio career in October 1930, at station WJKS, he found that the Depression had set in and his efforts in obtaining sponsors at that time were not very productive.  For some time after that uncertain beginning, Eddie considered it lucky to be able to pay for the radio time or to earn for his efforts only a few paltry dollars.

Ed was determined that with hard work his program would prove to be productive, and he was not afraid to implement his ideas.  With strong perseverance he finally began to see some results of his hard work.  After 17 months, he moved his “Polish Musical Varieties” program to station WWAE, the forerunner of the present WJOB, and remained there until 1982.  In 1936, he began broadcasting news events in the polish language.  His programs always were comprised of news, special information items, and music.  Through the years, more and more polka music was interspersed in the format of the programs.

Eddie devoted considerable time on his program to public service causes such as The March of Dimes, Red Cross, PNA Youth Camp of Indiana and many others.  His contribution to these worthy causes has been considered so valuable that he received several awards and commendations for his efforts.

Eddie Oskierko was considered the Granddaddy of all broadcasters of Polish language radio programs.  His was the longest continuous program produced in the Calumet Region.  After 52 years of talking to the public and playing a variety of music, Eddie retired from the business.  At the young age of 90 when inducted in 1983, Eddie Oskierko lived in Tempe, Arizona. He has since deceased.