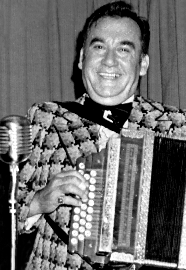 Few can equal the contributions made by Eddie Korosa in popularizing polka music. Eddie has left his mark across the entertainment spectrum, inspiring new generations of polka lovers along the way.

Eddie Korosa was born in the Southwest side of Chicago in 1918; a first generation American of Polish and Slovenian heritage, and 1 of 7 children. He attended St. Blaze’s grade school in Summit, and Argo High School. His father, Joseph, an accordion player, purchased Eddie’s first button-box accordion and taught him to play at the tender age of 8. With his first song, Over the Waves, Eddie’s musical destiny was in sight.

Before long, young Eddie Korosa embarked on the professional path – playing neighborhood parties by the time he was 10 and engagements in local taverns during his teens, including the tavern owned by his parents at 18th and Throop. His band was called “The Merry Makers.”

Shortly after expanding The Merry Makers in 1940, Eddie decided to join the war effort and served in the Army’s 180th Infantry Division. Although the war interrupted Eddie’s budding career, his music never stopped. With his accordion as his constant companion, Eddie was frequently called upon to give impromptu performances.

Returning home, Eddie resumed playing at clubs like the Topaz and Club Irene in Chicago. He wrote and recorded “The Baby Doll Polka” in 1951 – a perennial favorite to this day. Due to his song’s widespread popularity, Eddie and his band were soon in demand for appearances on polka radio shows. And in 1952, Eddie was honored with the title “Prince of Polkas” by radio station WTAQ. In 1971, he was the recipient of the Mr. Personality Award.

In 1954, Eddie built the Baby Doll Polka Club at 73rd and Western in Chicago where he and his Merry Makers, as the house band, entertained polka enthusiasts for decades. The Baby Doll Polka Club became famous for Eddie’s ability to dance on the bar during his performance (without spilling too many drinks) and as the broadcast home of his long running polka radio show. The club’s celebrity allowed Eddie the privilege to launch the careers of many other bands and musicians.

Eddie broadened his horizons in the fruitful years that followed. From 1954-1960, Eddie cut 5 albums, including the work on Ron Terry’s Polka Party album and 2 albums recorded with his sons. He wrote and recorded another hit, “All I Need Is You,” in 1964. For 30 years, Eddie entertained vast audiences with his own Eddie Korosa Polka Party television program on Channel 2 in Chicago, his regular appearances on the Ron Terry Polka Party on Channel 9 (WGN-Chicago) and his polka radio show from the Baby Doll.

This led to an increasing number and wide variety of performances: Frank Yankovic’s TV show in Cleveland, Irv Kupcinet’s Purple Heart Cruises through 1994, numerous ethnic fests named Oktoberfests sponsored by the City of Chicago, political parties for Democrats and Republicans alike (where Eddie performed before mayors and governors,) and several occasions at Grant Park for the Chicago Bulls Championship celebrations. Eddie and his band also took 15 tours to Hawaii and 15 tours to Europe.

Eddie’s guest appearances included performing with the Jan Garber Band at the Sabre Room in suburban Chicago, with Frank Yankovic at the Golden Nugget in Las Vegas, Guy Lombardo at Fort DeSoto Park in Florida, with Bobby Vinton’s show at the Star Plaza in Merrillville, Indiana, and with Lawrence Welk at the Palladium in California. He also made guest appearances in two movies, “One Potato, Two Potato” in 1969 and “Men Don’t Leave” with Jessica Lange in 1989.

Eddie was blessed with 6 children – 3 sons and 3 daughters –10 grandchildren and 1 great grandson, Edward Korosa, Jr. His oldest son, also name Eddie, was a drummer before he passed away. Eddie’s other sons continue to carry on the Korosa musical heritage – both have bands and both played the accordion and drums. Bruce was the Bruce Korosa Orchestra and Eddie Jr.’s band is The Boys from Illinois. Linda Karen and Debbie, Eddie’s daughters, are all happily married and raising children.

On Sunday, July 5, 1998, a surprise birthday party was hosted for Eddie in observance of his 80th birthday. Many relatives and friends were in attendance and Eddie even joined the musicians and played his button box accordion for the assembled guests.

On Wednesday, July 8, 1998, the Polka world was shocked to learn that Eddie Korosa died while at sleep.