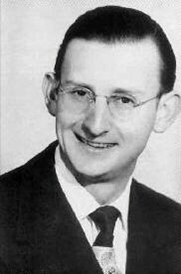 Eddie Habat was born in Cleveland, Ohio on September 16, 1926, the youngest child of John and Anna Habat. He had two brothers, John and Herman, and two sisters, Betty and Anna. When Eddie was eighteen months old, his mother was tragically killed in an auto accident. His father then returned to his homeland of Slovenia where he married Mary Cerar from Domzale, who came to Cleveland and raised the five Habat children.

Eddie led one of the five outstanding Cleveland-based orchestras (the others being Yankovic, Pecon, Vadnal and Bass) that achieved national prominence recording and performing Cleveland-style Slovenian polkas and waltzes. The youngest of the five leaders, he utilized his Slovenian musical heritage and developed a personally unique orchestral style that enjoyed widespread appeal across the nation.

Eddie was born with a natural talent for music and composition, and needed to hear a song only a few times before playing it perfectly, often improving on the original. Having little formal training on the accordion, he had a unique ability for chording and interpretation, and developed a personally unique orchestral style that enjoyed widespread appeal. He has been called one of the best accordion players of Slovenian music in the United States.

He began playing the accordion at the age of seven and by the age of eleven was playing weddings and private parties. As a child, he had listened faithfully to Martin Antoncic and his transcriptions on the radio of Yankovic, Pecon and Joe Sodja, and was soon able to play exactly what he heard. William (Doc) Lausche and especially Matt Hoyer were his inspirations.

In 1942 at the age of sixteen, Eddie was asked to assume leadership of the Johnny Pecon Orchestra while Pecon was in the Navy. It was a tremendous honor for teenage Eddie to be asked to take over one of the best bands of its time. After being called to serve in the Navy himself, Eddie rejoined the Pecon band, but later left to work on his own. In 1948, along with Kenny Bass and Pete Sokatch, he formed the Tunemixers who were given on WSRS a weekly half-hour radio show which was an instant hit with a #1 rating. A Decca recording contract followed and eight major hits were recorded, three of them original Eddie Habat compositions.

After the Tunemixer’s contract, Decca offered Eddie an exclusive contract which lasted for thirteen years. He made over 150 records and albums, some of which were advertised in “Billboard,” a national publication of the music industry.

In 1955, the Habat band was given its own thirteen week television show on WEWS and later made numerous appearances on the “Old Dutch Show” and on “Polka Varieties.” Along with playing four nights a week locally, the band played three to four times a month outside of the Cleveland area in the Midwest region and always drew huge crowds.

The Eddie Habat Orchestra was one of the country’s most successful. His original composition of “Go, Man, Go” sold 50,000 records in the first two weeks after it was released and was distributed internationally. Cleveland’s Bill Randle, one of the nation’s top disc jockeys, called it “the best football song of its time.”

His playing style was and is still imitated by many others, including Canada’s Polka King Walter Ostanek, who used to drive to Cleveland from Canada just to hear Eddie play. Over 25 of Eddie’s original polka and waltz compositions, bit hits like “Riverboat Polka,” “Uncle Nick’s Polka,” “Hi Lee, Hi Lo” and “Strawberry Hill Polka” have been recorded by many other groups.

Many honors have been awarded to Eddie throughout the years including Ohio’s Polka King in 1949 and again in 1981, Penn-Ohio Polka Pals Man of the Year in 1985, Man of the Year of the Akron-Barberton-Canton Polka Club in 1990 and in 1991 the Lifetime Achievement Award of the National Cleveland Style Polka Hall of Fame. “Go, Man, Go” (2000) and “Jack on St. Clair” (1999), both Eddie Habat hits, were winners in the Cleveland Polka Hall of Fame’s Greatest All-Time Cleveland-Style Polka Hits.

A retired painter, Eddie lived in Wickliffe, Ohio, with his second wife, Patricia, whom he married in 1987. His first wife, Diane, died in 1984 and was the mother of his six children: Mark, Eddie, Wayne, Jeff, Paul and Patty. There are 18 grandchildren and three great grandchildren. Eddie enjoyed building artistic balsa wood model airplanes. One of his planes, a model of a B-24, is in a museum at Sv. Trojica in Slovenia.

As Bob Dolgan of the Cleveland Plain Dealer said, “No one could turn on the emotion like Habat. He gave you the impression that he would gladly play for free.”  His last album, “From The Heart” certainly describes his love of Slovenian music.