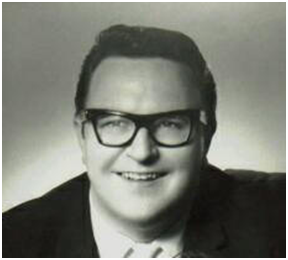 Eddie Blazonczyk was a native Chicagoan, son of Fred and Antoinette Blazonczyk, who for years operated the Pulaski Village Ballroom and later the Club Antoinette in Chicago.  Eddie started playing polkas in the early fifties with a four-piece combo known as “Happy Eddie and his Polka Jesters.”  They performed at many Polish weddings, anniversaries and other engagements in Chicagoland.

In 1958 Eddie went into the Pop music field as a song writer and recording artist for Mercury Records.  Under the name of Eddie Bell and the Bel-Aires, he recorded a few hits.  He toured the country and appeared on television on Dick Clark’s American Bandstand and the Jim Loundsbury Show.

In 1962 Eddie came back to the Polka field with a group known as the Versatones.  They toured and played in all parts of the U.S.A. and Canada.  A Poland European Tour included Italy and France.

Eddie Blazonczyk was also a polka promoter, a disc jockey heard on WTAQ weekly, and president of the Bel-Aire Record Company with studios in Chicago.

Eddie was honored at a testimonial in Buffalo, New York, in 1967, being given a gold key to the city and a gold plaque naming him the Nation’s No. 1 Polka Man.  This citation was registered with the Library of Congress in Washington, D.C.

Some of Eddie’s big hit recordings include “Angeline Be Mine Polka” (voted the best single recording of 1969), “Apples, Peaches, Pumpkin Pie,” “Poor Boy Polka” and “My Girlfriend Katie, Polka.”

Eddie Blazonczyk, Sr., passed away on May 21, 2012. He has been honored by many memorials and tributes since that date.

A Tribute to the life of Eddie Blazonczyk by Kevin Adams