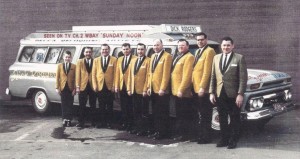 The Dick Rodgers International TV Recording Orchestra was organized in 1945 when Dick formed a band comprised of high school students.  Within a few years the band was doing live radio broadcasts and made their first recording in Chicago.  From recordings and radio the next step in promoting the band was TV.  In 1955 the first live telecast was made over Station WLUK, Green Bay, Wisconsin.  The program was later expanded from a half hour to a full hour.  In 1969, because the TV. show was so successful and popular, other Stations in the Midwest carried the show.  The TV. show was taped at Danceland Ballroom, located 6 miles north-west of Green Bay on different Wednesday nights throughout the year with live dancers.  It is then broadcast on various TV stations in the Midwest on Sundays at noon.  In 1976 it was the 21st consecutive year the Dick Rodgers Show had been on TV.

The band had 14 record albums, plus 8 track tapes and cassettes.  In past years most of the traveling and playing of dance engagements were in the Midwest.  However, in 1969 the bookings were expanded to Texas, Kansas, Nebraska, Connecticut, California and Florida.  In 1974, the band went international and played a tour in Austria, Switzerland and Germany.  In 1975 a tour was made to Hawaii with dance engagements played at Honolulu, the Don Ho Show, and at Kona.  The band was in its 31st year of playing dance engagements by ’76.  It was honored by the National Ballroom Operators Association, the Minnesota Ballroom Operators Association, the Wisconsin Orchestra Leaders Association and various dance booster clubs.

The family background included Dick’s dad, Joe Rodgers, who for a number of years operated a Polka band from 1925 to 1945.  Dick’s wife, Joan, assisted in the bookings and bookkeeping.  The family included Steve, married, who played the trumpet, sax, piano and guitar.  Son David played the bass guitar, piano and concertina; son Tom played the concertina, drums, guitar and piano; daughter Chris played the piano, flute and clarinet.

As of January 1, 1976, the year of Rodgers’ induction into the Polka Hall of Fame, the band was under the leadership of Fritz Willfahrt.  Dick Rodgers resided at Pulaski, Wisconsin, and was active in operating an insurance agency there, as well as being co-owner of the Danceland Ballroom. He is now deceased.