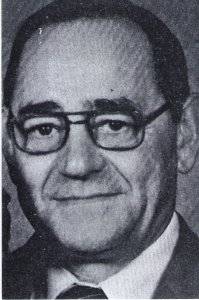 Musician and ballroom owner  Cliff Hermel was born March 18, 1918 in Mankato, Minnesota.  He graduated from high school in 1934 and entered the wholesale business with his father A.H. Hermel.  He was on the road in that business for 17 years, all the while though being very active and well known as a drummer.  He worked with most territorial bands and started his own in 1945.  Cliff was best known for his unique and entertaining style of drumming including his trademark “marching cadence” between polkas and rudiments on woodblocks, rims and even walls.

Cliff owned and operated the Gibbon Ballroom in Gibbon, Minnesota from 1961 until 1999 (38 years).  The Gibbon Ballroom was actually an entertainment complex consisting of three ballrooms (Ballroom, Boom Room, South 80) and a restaurant (Pumpernickel Room).  Cliff made the Gibbon Ballroom famous for its annual “Polka Days & Concertina Jamboree” held the last weekend in July.  The festival held a daily parade of musicians at 4 p.m. where the “Schneider & Sauerkraut Polka Medley” was played in all four venues with Cliff leading the parade and beating out drum cadence between the two polkas and while marching.  In addition, the festival featured an all-day concertina jamboree that allowed all concertina players an opportunity to perform in front of an audience with a backup band.  Not only did the concertina player receive a free drink, but Cliff also gave each one six silver dollars!  Due to Cliff’s efforts to promote polka music, in 1975 the city of Gibbon had painted on the water tower “The Polka City”.  The festival grew into a seven-day event with campers showing up a week in advance to get their parking spot.  It drew crowds from across the United States and became known as “The Granddaddy of Them All”!

Cliff was a past president of the Minnesota Ballroom Operators Association and board member for many years.  He was also the secretary of the Local 602 American Federation of Musicians for 16 years and a member for 65 years.  Cliff was a past president of the St. Peter Drum & Bugle Corps, and he and his wife Katie organized and operated two Junior Drum and Bugle Corps called “The Crusaders” and “Black Knights” for 16 years.

Cliff died October 29,1999 at the age of 81.  He dedicated his life to promoting polka music and will be remembered by all those who attended Gibbon Polka Days.  His slogan was “Stay Young, Go Dancing”.  And with that slogan he brought happiness to thousands of polka music fans preserving the music for as long as he could.