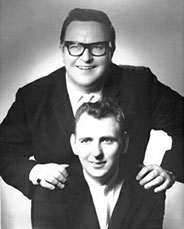 Destined to be a prominent figure in the polka circuit, Chet Kowalkowski began his musical career with the accordion at the age of eight. At twelve, he already won his first merit of achievement for the accordion on the John Nieminski WOPA Polka Show. After entering high school, he became fascinated with the trumpet. His expert ability with this instrument earned him the first chair in the school’s concert band and shortly after that the position of staff sergeant.

Chet entered a polka stage show and received first prize for his trumpeting and vocal expertise. All of these accomplishments motivated him to devote his musical attributes to the polka field.

In the mid-fifties, he played with Dick Billa on Ron Terry’s Polka show, which aired on WGN-TV. During that decade he formed his own group.

Through the years he has performed with top name bands such as the Versatones, Happy Hearts, Dial-a-Tones, Music Explosion, Paliga Polka Dots, Vibrasounds and numerous others.

Chet has also performed with many of polka music’s greatest artists – Eddie Blazonczyk (at top in picture), Marion Lush, the Ampol Aires and Li’l Wally. His career includes radio, TV, stage shows and numerous polka masses. His musical accomplishments enabled him to tour throughout the United States and Poland during his eleven years with Eddie Blazonczyk & the Versatones.

Known to his fans as the “Velvet Voice”, Chet recorded fourteen albums with Eddie Blazonczyk and many more with popular artists.

Besides numerous television appearances, he has performed on many remote broadcasts such as the Club 505 show on WJOB, the Chet Gulinski show on WOPA, the Johnny Hyzny show and Chet Schafer shows on WTAQ. Recently, the Polish Community Center in Buffalo, New York selected him to be the guest vocalist on an album entitled “A Kolberg Sampler” of Polish Folk Medlies and featured the PFC Players.

Deservingly honored by his peers in the polka music industry, Chet is the recipient of many awards. In 1987, he was presented with the “Stan Wozniak Jr. Memorial Award” for his musical talents as a sideman. In 1988, he was awarded “Best Trumpet Player” by the United Polka Association. That same year, he also received the “Outstanding Performance” award from Eddie Blazonczyk’s Versatones and in 1989 he was the recipient of the “Original Versatones Reunion” award.

Throughout the Christmas season, Chet organizes groups of musicians to visit and entertain friends, shut-ins and the business community. This has blossomed into a welcomed yearly tradition, bringing holiday cheer to many people.

Chet resides with his son David in Lockport, Illinois. Besides his son, he also has two daughters, Debbie and Donna and three grandchildren. He is employed by the Archdiocese of Chicago as a building maintenance engineer and is involved in several ventures of his own.

Aside from his first love, polka music, his recreational time is devoted to wood balsam modeling for which he has won certificates for original designing and creativity.