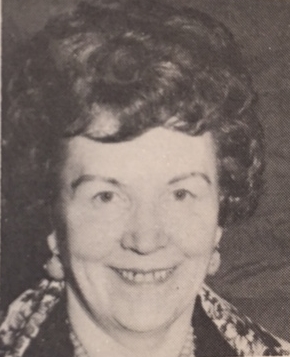 Antoinette Blazonczyk was born and raised in the southern mountainous part of Poland in a village called Chocholow.  Also known as “Gazdzina z Chocholowa” – Antoinette was a “goralka” and extremely proud of her Polish Heritage.

Back in the 1940’s Antoinette Blazonczyk recorded four 78 rpm records as a vocalist featuring authentic “goralska” music on the Podhalan Record label.  In 1948 she had purchased the Pulaski Village located at 17th & South Ashland Avenue.  It was here where Antoinette began promoting and strictly enforcing polka music exclusively.  Music, dancing, and polka lovers filled Pulaski Village five days a week.

Li’l Wally was a regular feature at the Pulaski Village from 1951 through 1961.  Live broadcasting was in effect with Li’l Wally 4:00 to 5:00 p.m. every Sunday over radio station WOPA.

In the 1950’s Antoinette returned to the Tatry Record label, which was owned by popular radio disc jockey, Zeb Zarnecki.  Here she recorded another four 78 rpm singles.  At one of the picnics sponsored by Antoinette Blazonczyk, over 9,000 people attended in the Justice Park Gardens.

Antoinette became temporarily inactive when the popular Pulaski Village was destroyed by fire in 1966.  However, a year later, in 1967, she purchased the Club Antoinette at 4559 S. Richmond Street in Brighton Park.  It was here that polka music again resumed on weekends.

The Polka field as well as the Polish community was shocked in June of 1972 by the sudden death of “Gazdzina” Blazonczyk.  Antoinette was the proud mother of two children, daughter Louise Kurek, who now resides in New York, and son, Eddie Blazonczyk, the popular, late polka band leader and disc jockey from Chicago.

Deceased, she is greatly missed by all.