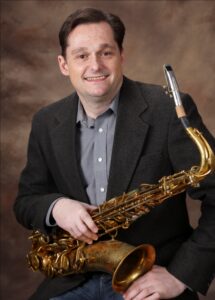 Don Hunjadi grew up with polka music, often watching his father, Richard, perform on stage as the drummer with Milwaukee polka great, Louie Bashell. Although he started playing trumpet in the fifth grade, by age 14, Don became the bass player with the Joey Klass band. At 17 he began playing saxophone and had his first opportunity to enter a recording studio where he became fascinated with the recording process and equipment. Only a few years later in 1982, he opened HG Studio and began a long career of both music recording and performing.

In only a few years, Don had already recorded and released projects for many bands including: the Steve Meisner Band (Songs of Love), Bob Doszak (High Flyin’), Hank Thunander & Edgar Heatcoat (Polka Jamboree), Jeff Winard (With Pleasure), Verne & Steve Meisner (Meisner Magic), and Grant Kozera with Frankie Yankovic (Beer Barrel Polkas). With the quality of his recordings getting noticed, the studio soon found itself booking more and more sessions – not only for polka bands but for the area’s best rock, country, big-band, jazz, and hip-hop artists. Jingles and production for radio and television commercials soon followed as the studio business became a full-time venture. Don also found himself performing as a session musician or as studio engineer on many more polka recordings, including for: Eddie Rodick, Don Gralak, Roger Bright, Don Peachy, John Check, Kenny Brandt, Erik Noltkamper, and a Grammy finalist release for Gordon Hartmann. In recent years Don can be heard on recordings with Alex Meixner, LynnMarie, Mike Schneider, David Austin, Tom Brusky, Gary Brueggen, Bud Hyrczyk, Steve Meisner, and many others.

Don has also been involved in radio by hosting polka shows including: Blue Chip Polkas, Polka Funtime and Polka Parade, on a variety of different radio stations. Now with nearly 40 years of radio broadcasting experience, Don is among the longest-running, continuous, polka radio show hosts in the country. His quick wit and upbeat-style shows are currently enjoyed by polka lovers from across the United States and throughout the world.

Although his career has taken him into many different music styles and many different instruments, Don continues today mostly playing woodwinds or bass with multiple different bands both on stage and in the recording studio. He also continues to play a variety of different music styles. He has recorded and is heard on over one-thousand different songs and has hundreds of polka music releases to his credit. it’s hard to thumb through a stack of recordings and not find some that Don has either played on, recorded in his studio, or both. Whether on stage, in the studio, or on the radio, Don has no plans to retire anytime soon.