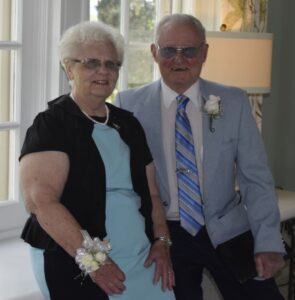 Frank Napiwocki and his wife Doris

Frank Napiwocki is one of the recipients this year.

Frank grew up surrounded by polka music, listening to Little Wally, so it was only natural that his love of the music and culture would carry over into adulthood. Frank started promoting polka music by hosting many, many dances over the years. He was promoting polka music before it was played on the radio, before the Internet was even heard of much less a polka show over the internet, and probably before many of us were born or were knee high at best. Frank brought in some of the greatest legends in polka music from Eddie Blazonczyk, Marion Lush, Stas Golonka, TPM, Frankie Liszka, Windy City Brass, and the Dynatones just to name a few. Frank started many festivals such as the Pacelli Panacea Polka Pow Wow fest which continued for over 40 years; the Golden Sands Freedom Fest; Memorial Day and New Year’s Eve dances; and many, many dances in between. Because Frank was a dancer and insisted on dancing on a smooth floor, that’s about the time he built the first wooden portable dance floor. The floor can be set up on any surface indoor or outdoor and is still being used to this day at many church fests, weddings, and other events. Frank and his wife Doris not only promoted the polka music for over 30 years, but they also supported it. They traveled to events all over the country and went on a few polka cruises as well. They raised their 5 children surrounded by polka music and all of them were taught how to dance. He is very proud to say that his youngest son and daughter-in-law have carried on his love of polka music and started promoting as well-hosting Valentines dance in Wausau. Now in his 80’s, Frank still attends polka dances and while he and Doris don’t run around the dance floor as quickly.