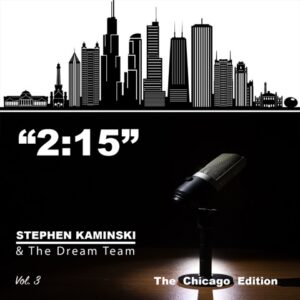 IPA Director Stephen Kaminski is pleased to announce the third installment of his solo project series to be called “Stephen Kaminski & the Dream Team, Volume 3 – The Chicago Edition”.

The first single from the upcoming project is a song entitled “2:15”.

The song was debuted on Craig Ebel’s show “It’s Polka Time” and is reminiscent of a ‘70s song by Red Sovine called “Teddy Bear”. It is done as a similar narrative and recounts a heart wrenching story of a simple request from a little boy named Stuart to a polka DJ. The song is meant to bring back our sense of community and human kindness, and how choosing to go out of your way for someone, even a stranger, can sometimes make a difference. It also brings some new life to an old classic!

The single “2:15” is available now as a digital download exclusively on the IPA Website’s Store Page.

All proceeds from the sale of the single are being graciously donated to the IPA.

Once the album is released next year, it will also be found here as an exclusive download.

Get a box of tissues, and enjoy Stephen Kaminski’s single “2:15”.