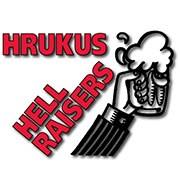 For better than four decades now, this informally organized group from the Albany, N.Y./Western Mass. area (only a few of whom actually play polkas), has been supporting and promoting the music they obviously love, making it fun to be at the events they attend, and doing so with an enthusiasm that borders on mania. They have become fixtures at most every major dance/festival in the area (and beyond); have played a huge role in the continued existence of polkas in the Capital District through the “Hrukus Halloween Howler” polka weekends they run; have achieved some notoriety through their participation (and mention) on the Dynatones’ “Live Wire” recording, and genuinely enjoy what they do, with little regard for any payback or compensation. Promoting polka music for the love of polka music.

The roots of Hrukus Hellraisers date back to 1976 and a Halloween dance being held at the Albany PCC. There, the late IPA Hall of Famer Jan Cyman, started calling a rag-tag group consisting of Bill and Doris Dobrucki (The Captain and Mrs. Captain), BIll Bybel, Mark “Big Staś” Clark, and Charlie “Tuna” Strylka, “a bunch of Horilka (Ukrainian for vodka) Hellraisers.” The name morphed into “Hrukus Hellraisers” and seemed appropriate, so The Captain took it upon himself to make official looking pins for the group. Feeling that the bands they supported were at least as crazy as they were, pins were made for the musicians as well, and presented at their appearances. Side note: today, those early Hellraiser pins, complete with member photo which really underscore the years that have passed, are treasured by musicians from that era.

As mentioned, the Hellraisers loved to take their show on the road, becoming staples at literally every festival held within a five-hour drive of their home base. A friendship they’d struck with Hank and Pat Mazurek of Buffalo’s Broadway Grill fame, would result in the Hrukus calling “The Grill” their home away from home, making regular visits there for “East Meets West” weekends and prompting their attendance at and mention on “Live Wire,” where their name — and the Broadway Grill bell being rung by The Captain — will forever be remembered.

Today, some 43 years after their start, most of that core group of Hrukus Hellraisers still avidly supports polkas throughout the region and has drawn the respect of area polka lovers who appreciate all that they do for the music and its importance to the area. Not content with simply attending polka events, some 28 years ago they began bringing in out-of-town groups to the Ukrainian American Citizens Club (their home base) for their Halloween polka weekends. Those weekend are highly anticipated by locals and out-staters alike and have, in the past, served as great fund-raising opportunities for those in polkas who are in need of financial assistance.

Despite the high caliber of musicians at work in polkas today, there’s little doubt that the music could not survive without the support of a dedicated fan base. All those years ago, Hrukus Hellraisers chose polkas as their favorite genre of music and have continued to show unflagging support for it.

Christy Krawisz
I.P.A. President
Click here for a link to the photos from the award presentation at Pott’s Banquet Hall in Buffalo, NY