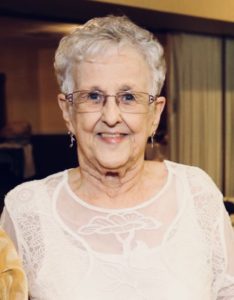 Many years ago, the late Joseph Jozwiak, a director of the IPA, proposed an award be bestowed upon an individual or group of individuals who made a significant contribution or endeavor to enhance the promotion of polka music. Originally named the Special Achievement Award, the International Polka Association voted to honor those worthy individuals. Following his passing, the award was renamed the Joe Jozwiak Special Achievement Award to pay tribute to Joe and his idea.

We are proud to announce that the winner of the 2019 Joe Jozwiak Special Achievement Award is Sally Rzeszutko.

Sally has been a longtime IPA member and supporter of polka music. Three of her four children are polka musicians; Bob “Odie”, Rick, and Ray “Melvin” Rzeszutko. Sally also has a daughter, Rhonda, and is the proud grandmother of seven grandchildren.

Sally has dedicated numerous hours volunteering for the IPA. You have probably spoken to her as she worked the admission table at so many of the Chicagoland IPA events as well as the IPA Festival and Convention. Sally has also assisted with several duties for the Hall of Fame and Music Awards Banquet. Sally has spent uncountable hours taping, labeling, and stamping practically every newsletter over the past five years.

Sally also spends much of her time supporting as many polka bands as she can by attending their dances and enjoying the music she loves so much.

Please join us in congratulating Sally on this richly deserved award.